Our Lady on Saturday

Mass of Our Lady on Saturday, from the Purification until Easter 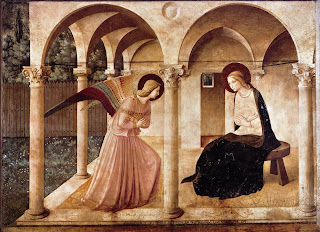 At this season, consecrated to the great work of our Redemption, the Mass of the Blessed Virgin shows us Mary as Mother of our Saviour. She was predestined from all eternity for the role of co-redemptrix (Epistle), for as Eve was the intermediary chosen by the Angel of darkness to bring about the fall of Adam, so is Mary the intermediary to whom the Angel Gabriel (tract) delivered the message of salvation from heaven. She is also blessed, since she heard the word of God and obeyed it (Gospel).

The beautiful introit used for the common masses of Our Lady - Salve Sancta Parens - is two lines taken from the "Carmen Paschale" (liber secundus, lines 63-64) by the great fifth century Christian poet Sedulius. When sung, the Gregorian chant used is the same beautiful melody as for the Epiphany.

Salve, sancta Parens, eníxa puérpera Regem: qui coelum terrámque regit in saecula saeculórum. * Eructávit cor meum verbum bonum: dico ego ópera mea Regi.
Hail, holy Mother, thou who didst bring forth the King who ruleth heaven and earth for ever and ever. * My heart hath uttered a good word: I speak my works to the King.
(Sedulius and Psalm 44:2 from the Introit of Mass).

Rejoice, O Virgin Mary, thou alone hast destroyed all heresies.
V. Who didst believe the words of the archangel Gabriel.
V. Whilst a virgin thou didst bring forth God and man: and after childbirth thou didst remain a virgin.
V. O Mother of God, intercede for us.
(Tract)

Catholic Encyclopaedia on Sedulius: http://www.newadvent.org/cathen/13680a.htm
The Carmen Paschale is available at The Latin Library: http://www.thelatinlibrary.com/sedulius.html
Posted by davidforster at 00:30 No comments: 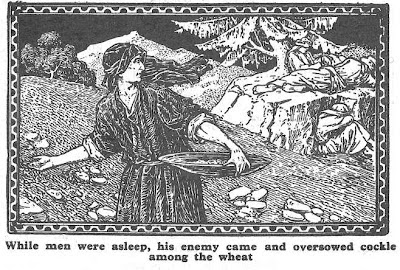 In the Gospels for the preceding Sundays after Epiphany, our Lord's divinity was shown forth by His miracles. Today it is affirmed through His doctrine, which filled the Jews of Nazareth with wonder (Communion).

Christ is our King (Introit, Alleluia), for He welcomes not only Jews but also Gentiles into His Kingdom. Called through pure mercy to share in teh mystical body of Christ, we must then in our turn, show mercy to our neighbour since we are made one with him in Christ Jesus (Epistle). In doing this we shall have need of patience, since in God's kingdom here on earth there are both good and bad, and it is only when our Lord comes to judge men, as described in the last Sunday of the temporal cycle, that He will separate the one from the other for all Eternity. 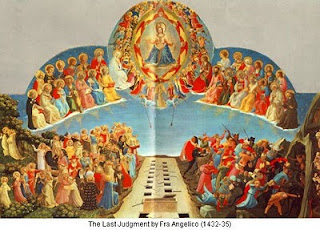 Familíam tuam, quaesumus Dómine, contínua pietáte custódi: ut quae in sola spe grátiae coeléstis in innítitur, tua semper protectióne muniátur.
Keep, we beseech Thee, O Lord, Thine household in Thine unceasing goodness that, as it leans only upon the hope of Thy heavenly grace, so it may be always defended by Thy protection.
(Collect)

The continuation of the holy Gospel according to Matthew.
At that time, Jesus spoke this parable to the multitudes: The kingdom of Heaven is likened to a man that sowed good seed in his field. But while men were asleep, his enemy came and oversowed cockle among the wheat, and went his way.And when the blade was sprung up and had brought forth fruit, then appeared also the cockle. And the servants of the good man of the house coming, said to him: Sir, didst thou not sow good seed in thy field? Whence then has it cockle? And he said to them: An enemy hath done this. And the servants said to him: Wilt thou that we go and gather it up? and he said: No, lest perhaps, gathering up the cockle, you root up the wheat also together with it. Suffer both to grow until the harvest, and in the time of the harvest I will say to the reapers: Gather up first the cockle and bind it into bundles to burn, but the wheat gather ye into my barn.
(St Matthew 13:24-30)
Posted by davidforster at 00:30 No comments: