St. Felix I, Pope and Martyr 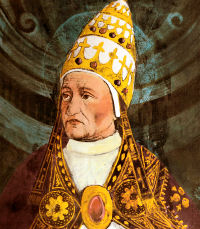 St. Felix ascended in 269 the throne of Peter to whom Jesus before His Ascension had committed His Church. He commanded Masses to be celebrated over the tombs of martyrs, and it is in remembrance of this prescription that the relics of martyrs are placed in a small cavity of the altar stone, called tomb. The altar, nowadays, has indeed often the shape of a tomb, this being a relic of the "Confession" or underground tomb which is found under the high altar in Roman basilicas, and is reached by stairs. The custom of uniting the remembrance of martyrs to the sacrifice of the Mass or of Calvary, shows that these martyrs, having entered into the bosom of Jesus (Gospel), have found there the strength to confess their faith before their enemies and the grace of being children of the Father (Epistle).

St. Felix bore witness to Christ in 274, under the persecution of Aurelian.

Be mindful of our weakness, O almighty God, and since the burden of our deeds is grievous to us, grant that the glorious intercession of blessed Felix Thy martyr and bishop may protect us.
(Collect)


From the Catholic Encyclopaedia: http://www.newadvent.org/cathen/06029b.htm
Posted by davidforster at 00:30 No comments:

27th May, St Bede the Venerable, Confessor and Doctor 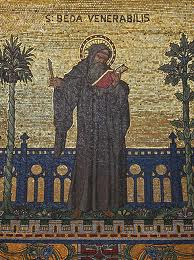 Born at Yarrow in Northumberland, Bede was committed, as a child, to St. Benedict Bishop, abbot of the Benedictine monastery at Wearmourth.

The Holy Ghost filled him with wisdom and intelligence (Introit), wherefore his writings, penetrated by holy doctrine (Epistle), were read aloud in the churches, even in his lifetime. As it was not permissible to call him Saint, he was called "The Venerable," a title he kept after his death. He was one of the most learned churchmen in the eighth century and his name is found among those of the Doctors of the Church.

Not satisfied with teaching men the Law and the Prophets, he also practised the most beautiful virtues (Gospel). On the Eve of the Ascension he received the Last Sacraments, embraced his brethren, lay down on the ground upon his hair cloth, said twice : Glory be to the Father, and to the Son and to the Holy Ghost, and fell asleep in the Lord on May 27th, 735.

Let us honour Bede, the holy Doctor, that we may always be enlightened by his wisdom and helped by his merits (Collect).

In medio Ecclesiae aperuit os ejus: et implevit eum Dominus spiritu sapientiae et intellectus: stolam gloriae induit eum. * Bonum est confiteri Domino: et psallere nomini tuo, Altissime.
In the midst of the Church the Lord opened his mouth: and He filled him with the spirit of wisdom and understanding: He clothed him with a robe of glory. * It is good to give praise to the Lord: and to sing to Thy name, O most High.
(Ecclesiasticus 15:5 and Psalm 91:2 from the Introit of Mass)

Deus, qui Ecclesiam tuam  beati Bedae Confessoris tui atque Doctoris eruditione clarificas: concede propitius famulis tuis; ejus semper illustrari saptentia et meritis adjuvari.
O God, who by the learning of blessed Bede, Thy confessor and doctor, hast glorified Thy Church: grant that Thy servants may ever be enlightened by his wisdom and helped by his merits.

From the Catholic Encyclopaedia: http://www.newadvent.org/cathen/02384a.htm
Posted by davidforster at 00:30 No comments:

St. John I, Pope and Martyr

Pope St. John I (525-526) governed the Church at the time when the Arian King Theodoric ravaged Italy. This king, having artfully enticed him to Ravenna caused him to be thrown into a dark dungeon where he died. His body was buried at Rome in the Basilica of St. Peter.

O God, who givest us joy by the annual solemnity of blessed John Thy martyr and bishop, mercifully grant that we may rejoice in his protection whose birthday we celebrate.
(Collect)

From the Catholic Encyclopaedia: http://www.newadvent.org/cathen/08421a.htm
Posted by davidforster at 00:30 No comments: