St Sylvester I, Pope and Confessor 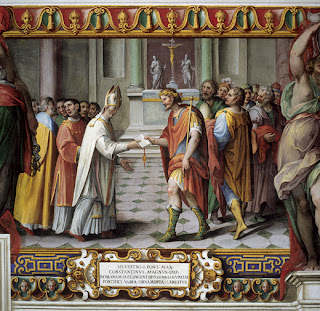 The Church reproduces in her liturgy all the phases of the life of her Divine founder. When only just born, the Infant God is persecuted by Herod: the Church still in her cradle sends to heaven her first martyr in the person of the deacon Stephen, and her first twenty-five popes die as martyrs.

Returned from Egypt, Jesus grows in age and wisdom at Nazareth, where the years pass in quietness: under the pontificate of Sylvester I (314-325) the Church, after three hundred years of persecution, begins to enjoy liberty, which is her greatest boon. She spreads in the Roman Empire, and the Council of Nicea (325) establishes triumphantly against Arius the doctrine of the Divinity of the Saviour, of which the liturgy of the season of Christmas is full.

"At the first Council of Nicea," the Breviary tells us, "the Catholic faith on the subject of the Divinity of Christ was explained by three hundred and eighteen bishops; Arius and his sect being condemned. At the request of the Fathers, Sylvester confirmed this council in a Synod held at Rome, and in which Arius was condemned again."

According to the lesson in the Breviary, Sylvester decreed also that the bishop alone should consecrate the chrism; that in the administration of Baptism the priest should anoint with the holy oils the crown of the head of the person being baptized; that deacons should wear the dalmatic and have a maniple of linen on the left arm; and finally that the sacrifice of the Mass should be offered up upon an altar cloth of linen.

He fixed also a certain period for those who should receive Holy Orders, during which they must exercise successively their Order in the Church, before being raised to a higher degree. Sylvester ruled the Church twenty one and a half years. He was buried in the cemetery of Priscilla on the Salarian Way.

Grant, we beseech Thee, almighty God, that the solemn festivity of blessed Sylvester Thy confessor and pontiff may increase both our devotion and salvation.
(Collect)

Hymn for Confessors from the Breviary

This the Confessor of the Lord, whose triumph
Now through the wide world celebrate the faithful,
At his departure entered with rejoicing
Heavenly mansions.

Fervent and holy, prudent in his converse,
Humbly and chastely here on earth he sojourned,
Curbing all passions, and in peace and meekness,
Constant abiding.

What though the grave now hold his hallowed relicks?
He, ever living, ever interceding,
Reigns with the Blessed, nor from us his brethren
Is he divided.

Whence we in chorus gladly do him honour,
Chanting his praises with devout affection,
That in his merits we may have our portion,
Ever and ever.

Glory and virtue, honour and salvation,
Be unto him that, sitting in the highest,
Governeth all things, Lord and God Almighty,
Trinity blessed.  Amen.

From the Catholic Encyclopaedia on Pope St Sylvester I: http://www.newadvent.org/cathen/14370a.htm
Posted by davidforster at 00:30 No comments: