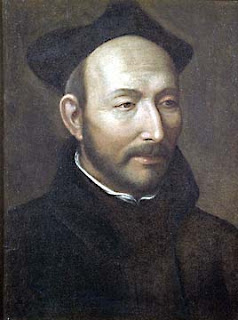 Ignatius was born in Northern Spain, in 1491. He was the eleventh child of the Lord of Loyola, and at the age of fifteen, came as page to the court of king Ferdinand V.

His ardent and martial nature caused him to choose a military career. At the siege of Pamplona, he was severely wounded in the leg. During his long convalescence, in the absence of books of chivalry for which he had a passion, they gave him the lives of Jesus Christ and of the saints to read. This reading was for him a revelation. It dawned on him that the Church also has her army which, under the orders of the representative of Christ, fights to defend here below the sacred interests of the God of hosts.

[To the three religious vows St. Ignatius adds a fourth by which the members of the Society of Jesus bind themselves to go wherever the Pope will send them for the salvation of souls.]

He then laid down his sword at the feet of the Virgin, in the famous Benedictine Abbey at Montserrat, and his generous soul, once enamoured of worldly glory, now only longed for the greater glory of the King whom henceforth he will serve (Collect). Throughout the night of March 25, when the mystery of the Incarnation of the Word is solemnized, after confessing his sins he kept his knightly vigil, and the Mother of God armed him for Christ and the militant Church, His spouse. Soon he became General of the Society of Jesus, raised by Providence to combat Protestantism, Jansenism and returning paganism.

On the mountain the sons of Benedict, as a prelude to the liturgy in heaven, will continue the solemn celebration of the divine offices which Ignatius will recommend to the faithful, and whose sacred melodies he never heard without tears; and he, sacrificing himself to his mission, goes down into the plain to oppose with his valiant troops, the attacks of the hostile army whose violent onslaughts are always directed against his Institute (Epistle). Wherefore, to preserve in his sons the intense interior life required by the militant activity to which he devotes them, St. Ignatius subjects them to a strongly organized hierarchy and teaches them, in a masterly treatise highly approved of by the Church, his spiritual exercises which have sanctified thousands of souls. It has been affirmed that it was the practice of the Exercitatorium of the Benedictine Cisneros, abbot of Montserrat in 1500, which inspired him with the idea. Guided by grace, he realized it however at Manresa in a different and very personal way.


[The third of the eighteen rules made by St. Ignatius, as the crowning of the Spiritual Exercises, "that we may have the true sentiments of the orthodox Church," recommends to the faithful the Canticles of the Church, the psalms and the different canonial hours at their appointed times. And at the head of this book, in order to enable one to draw most profit from these Exercises, he rules in his twentieth note that he who can do so is to choose, for the duration of the Exercises, a dwelling whence he may easily go to the offices of Matins and Vespers, as well as to Mass " (Liturgical Year : July 31th, St. Ignatius of Loyola).]

St. Ignatius arms his sons giving them for their shield the name of Jesus (Introit), for their breastplate the love of God which the Saviour came to enflame on earth (Communion) and whose symbol, the Sacred Heart, they gloriously bear in the folds of their flag; and for their sword, preaching, writing, teaching and all other forms of apostolate.

[When he sent missionaries abroad he used to say to them: " Go, my brothers, Inflame the world and spread everywhere the fire which Jesus Christ came to kindle on the earth" (Communion).]

It was in a Benedictine monastery in Spain that at the feast of the Annunciation, St. Ignatius first used these arms; in a chapel of the Benedictine Abbey of Montmartre that on the Feast of the Assumption in 1534 and later on at the altar of the Virgin of the Basilica of St. Paul-without-the-Walls, served by Benedictines, that was born the Society of Jesus, that noble chivalry of Christ, and lastly it was the Benedictine Pope Pius VII, a native of Cesena and a monk of its abbey, who in 1814 re-established it in all its rights. It is therefore God Himself who unites at the feet of the Blessed Virgin these two Orders which powerfully help the Church, for Martha and Mary, action and contemplation, both contribute, by different means, to the glory of God. The mottoes of these two religious families are alike: " In all things God be glorified! I.O.G.D." and: "To the greater glory of God! A.M.D.G."

Not to do anything except for the glory of God and to do everything for His greater glory is the perfection of holiness. It is the end of the creation, the end of man's elevation to a supernatural life, the end indeed of the evangelical precepts which cause generous souls to renounce, by vow, things that are lawful, in order to devote themselves more freely to the interests of God, and to render to Him in its entirety the accidental glory He had been deprived of by man's use of unlawful things.

Benedict has filled Europe with his missionary monks whose principal work is to praise God, and Ignatius with his priest-apostles (Gospel) who make manifest their interior life by their untiring activity.

From Montserrat, twelve monks with their Superior started with Christopher Columbus for the new Continent. From Lisbon, started Francis Xavier who first evangelized Japan and China. It is the same tree of the love of God which, on different branches, bears the same fruit.

On July 31, 1556, St. Ignatius died pronouncing the name of Jesus, and his society spread throughout the world. It numbers nowadays forty four provinces, and several hundreds of colleges.

[The Society of Jesus numbers 23 canonized saints, 142 beatified, 3 venerables and over 100 whose 29 causes are being discussed. It had in 1934 24,270 members : there were 24,000 at the time of the suppression. It has given to the Church illustrious prelates and a large number of apostles, learned men, educators and influential men, as is proved by the numerous congregations or religious associations which have imbibed the spirit of the Pounder, and by the many pious institutions under the direction of the sons of St. Ignatius. The Apostleship of Prayer for instance, is believed to number some 30 millions associates.]

May we obtain by the intercession of St. Ignatius so to be sanctified in truth (Secret) by the sacred mysteries of Mass and Communion, the source of all holiness, that with the help of this saint, we may after his example, so combat evil on earth, as to be crowned with him in heaven (Collect). 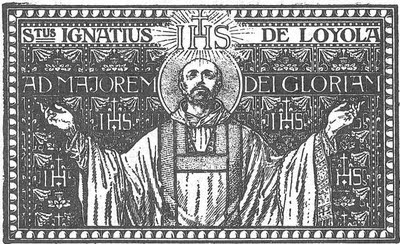 In nomine Jesu omne genu flectatur, caelestium, terrestrium, et infernorum: et omnis lingua confiteatur, quia Dominus Jesus Christus in gloria est Dei Patris. * Gloriabuntur in te omnes, qui diligunt nomen tuum: quoniam tu benedices justo.
In the name of Jesus let every knee bow, of things in heaven, on earth and under the earth: and let every tongue confess that the Lord Jesus Christ is in the glory of God the Father. * All they that love Thy name shall glory in Thee: for Thou wilt bless the just.
(From the Introit of Mass, Philemon 2:10-11 and Psalm 5:12-13.)

From the Catholic Encyclopaedia: http://www.newadvent.org/cathen/07639c.htm
Posted by davidforster at 00:30 1 comment: 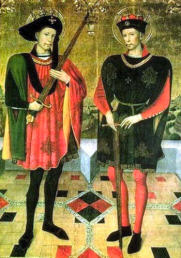 Abdon and Sennen, born in Persia "were arrested and taken to Rome under the Emperor Decius. They were scourged with cords weighted with lead and beheaded" (Roman Martyrology). This was in the middle of the third century (A. D. 254).


Intret in conspectu tuo, Domine, gemitus compeditorum: redde vicinis nostris septuplum in sinu eorum: vindica sanguinem sanctorum tuorum, qui effusus est. * Deus, venerunt gentes in haereditatem tuam: polluerunt templum sanctum tuum: posuerunt Jerusalem in pomorum custodiam.
Let the sighing of the prisoners come in before Thee, O Lord; render to our neighbours sevenfold in their bosom; revenge the blood of Thy saints, which hath been shed. * O God, the heathens are come into Thy inheritance: they have defiled Thy holy temple: they have made Jerusalem as a place to keep fruit.
(Psalm 78:11-12,1 from the Introit of Mass)

Deus, qui sanctis tuis Abdon et Sennen ad hanc gloriam veniendi copiosum munus gratiae contulisti: da famulis tuis suorum veniam peccatorum; ut Sanctorum tuorum intercedentibus mentis, ab omnibus mereantur adversitatibus liberari.
O God, who didst endow Thy holy martyrs Abdon and Sennen with abundant gifts of grace that they might come to their present glory; forgive the sins of Thy servants, that the merits of Thy saints pleading on their behalf, they may deserve to be delivered from all adversity.
(Collect)

From the Catholic Encyclopaedia: http://www.newadvent.org/cathen/01032a.htm
Posted by davidforster at 00:30 No comments: 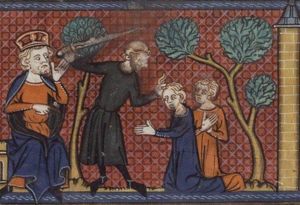