5th August, Our Lady of the Snows

The Dedication of the Church of our Lady of the Snow 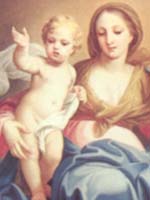 This church was built at Rome, on Mount Esquiline, in the fourth century during the pontificate of pope Liberius. In the middle ages a graceful and popular tradition ascribed its foundation to a noble patrician who, having been favoured with a vision of Mary, caused it to be erected on a spot covered by a miraculous fall of snow.

This sanctuary was rebuilt in the following century and dedicated by Sixtus III in 432, to Mary, whom the Council of Ephesus (431) had just proclaimed the Mother of God. The mosaics of the triumphal arch glorify this divine maternity, and the representations of the two cities of Bethlehem and Jerusalem, recall the birth of Christ in the city of David, and that of the Church in the Cenacle of the Last Supper. These mosaics were restored in 1931-1934. The Basilica is also called St. Mary of the Crib, because portions of the crib are preserved there.

St. Mary's, called Major, because it is the largest and most important of the churches dedicated to the blessed Virgin, is a patriarchal basilica. The great nave is formed by two rows of forty-four columns of white marble and the ceiling is covered with the first gold brought from America.

In this church, whose dedication is solemnized on this day, takes place the inauguration of the liturgical year on the first Sunday in Advent, there are held the Stations at Christmas, on the feast of St. John, at Easter, on Rogation Monday, and on all Wednesdays in Ember Weeks. 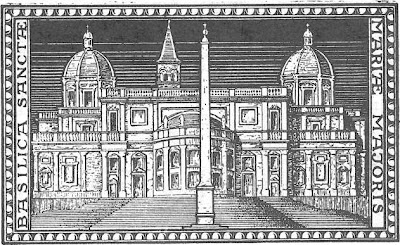 Salve, sancta parens, enixa puerpera regem: qui coelum, terramque regit in saecula saeculorum. * Eructavit cor meum verbum bonum: dico ego opera mea Regi.
Hail holy Mother, thou who didst bring forth the King who ruleth heaven and earth for ever and ever. * My heart hath uttered a good word: I speak my words to the King.
(Sedulius, and Psalm 44:2 from the Introit of Mass)

From the Roman Breviary:
When Liberius was supreme Pontiff, a certain John, a Roman Patrician, and his wife, of equally noble race, since they had had no children whom they might leave as heirs to their estates, devoted their inheritance to the most holy Virgin Mother of God, continually begging of her, with the most earnest prayers, that she would make known to them, by some means, in what pious work in particular she wished them to expend the money. The Blessed Virgin Mary graciously heard their heartfelt prayers and vows, and acknowledged them by a miracle.
Therefore, on the Nones of August (August 5), at which date the most intense heats usually occur in the City, a part of the Esquiline hill was covered with snow during the night. That same night, the Mother of God urged John and his wife separately, in their dreams, to build, upon that spot which they should see was sprinkled with snow, a church which should be dedicated to the name of the Virgin Mary; for it was in this manner that she wished to become their heiress. John related this to Pope Liberus, who declared that the same thing had happened to himself in a dream.
He went, therefore, with a solemn procession of priests and people to the snow-clad hill, and marked out the plan of a church on that site, which was built with the money of John and his wife ; it was afterwards restored by Sixtus III. At first it was called by various names: the Liberian basilica, S Mary at the Crib. But, since there were already many churches in the City with the name of the holy Virgin Mary, and, as this basilica surpasses all the other basilicas named after her, both by the strangeness of that miracle, and by its own grandeur; that its supereminence may likewise be indicated in its title, it is called the church of St Mary Major. A commemoration of this dedication is celebrated by a yearly feast that is named after the snow, which on this day so miraculously fell.

From the Catholic Encyclopaedia: http://www.newadvent.org/cathen/11361c.htm 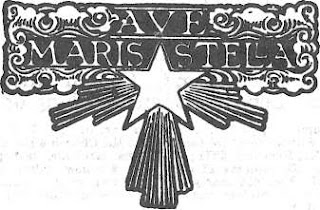