As we have seen, the breviary lessons throughout October are taken from the Book of Machabees.

Judas Machabeus had heard very great things of the power of Rome, of far-off countries brought to subjection and many kings compelled to pay yearly tribute; and on the other hand, of the willingness of the Roman people to accede to requests made to them, and of their readiness to swear friendship with any nation that approached them for the purpose. Judas, therefore, decided to take the step of sending messengers to Rome itself, to seek the friendship and alliance of its people. This request was received favourably by the Senate, who later twice renewed the treaty of peace, first with Jonathas and then with Simon, who had succeeded their brother Judas Machabeus as a ruler. Soon however, the little kingdom was torn by civil war, brothers in hostile camps disputing the power between them. One of these thought fit to summon the Romans to his assistance; the invitation was accepted, and in 63 B.C. Pompey took Jerusalem.

It must be remembered that Rome never gave back what it had taken by force of arms. Palestine became and remained a Roman colony, the Senate appointing Herod, king of the Jews. This ruler, by way of pleasing the Jews richly rebuilt and enlarged the Temple at Jerusalem, and it was into this third Temple that our divine Lord made His triumphal entry later on.

From the moment of this conquest the Chosen People had to pay tribute to Rome, a fact which is alluded to in to-day's Gospel. This incident marks one of the last days of our Lord's life, and it was an occasion when the Master, in an answer full of heavenly wisdom, put to confusion His enemies, who from then on, were more than ever bent upon His destruction.

The necessity of paying tribute to Caesar was all the more odious to the Jews, since it went quite contrary to their instinct for universal supremacy, the promise of which Israel believed it had received. It followed that anyone who maintained the duty of payment had public opinion against him, while those who held the opposite view incurred the anger of the Roman authority in possession, and of those among the Jews who approved it and who formed the party of the Herodians. When therefore, the Pharisees thought to drive our Lord on to one or the other of the horns of this dilemma, it was in order to embroil Him either with the people or with the Roman power; on one count or the other they thought they could secure His arrest.

The better to attain their end, they sent Him a deputation of Jews consisting of members of both parties, of "their disciples with the Herodians", as St. Matthew puts it. To get an answer to their question, these men began by telling our Lord that they knew that He "taught the way of God in truth" without "regarding the person of men". And then they laid their snare before Him. "Is it lawful to give tribute to Caesar or not? But Jesus, knowing the malice that was in them, answers: "Why do ye tempt me, ye hypocrites?" And then, evading their attack with the greatest skill, He bade them show Him "the coin of the tribute" to force them, as He always did on these occasions, to answer their own question.

For when the Jews had offered him "a penny" of this money, He asks them: "Whose image and inscription is this?" They say to Him: "Caesar's." As a matter of fact, before the tribute could be paid it was a necessary preliminary to change the money of the country for coins bearing the image of the emperor; and since a coin is only of value in the country of the monarch whose image it bears, by this very exchange the Jews acknowledged that they were under Caesar's rule, and that they intended to pay tribute to him. "Render therefore to Caesar," says our Lord, "the things that are Caesar's", and then suddenly becoming the Judge of His hearers, He adds: "And to God the things that are God's", which means that since the soul of a man belongs to God who made it in His image, all the faculties ought to return to Him, in the sense of paying the tribute of their worship and service.

"We," says St. Augustine, "are the coins of God stamped with His image, and God demands the return of His coins as Caesar did the return of his." And St. Jerome adds: "Let us give to Caesar the money which bears his inscription, since we cannot do otherwise, but let us give ourselves freely and of our own accord to God, for what our soul bears is the glorious imprint of the face of a God and not the more or less majestic head of an emperor." Bossuet says: "This image will one day pass again through the hands and before the eyes of Jesus Christ, and some day He will look at us and say: 'Whose image and inscription is this?' And the very depth of our being will answer: 'God's'." "It is for Him that we were made and we must bear His stamp upon us. It had to be restored in baptism of which it is the effect and character. But what has become of the divine features which we ought to bear? Christian soul, may God's image be in your reason! But this you have drowned in drunkenness ; you have sunk it in the love of pleasure; you have surrendered it to ambition ; you have made it the slave of gold, which is a form of idolatry; you have sacrificed it to your appetites of which you have made a god; you have made of it an idol of vain glory, and instead of praising and blessing God day and night, it is itself constantly praised and admired."

And the divine Redeemer will say: "Amen, Amen, I know you not: you are not my work, no longer do see in you what I put there. You have chosen to form yourself in your own way: you are the work of pleasure and ambition: you are the work of the devil, whose works you have done, and whom, by taking him as your model, you have made your father. Go with him who knows you, and whose promptings you have followed; go to fire eternal which has been prepared for him. O just Judge! And where shall I be found? Shall I acknowledge myself, when my Creator has disowned me?" (Meditations sur l'Evangile. Thirty-ninth day.)

It is in this sense that we must interpret this Sunday's Gospel, one of the last of the ecclesiastical year and in which the Church reminds us of the end of the world. Thus the Epistle twice speaks of the coming of Christ as nigh at hand. St. Paul prays that " He who hath begun a good work in you, will perfect it unto the day of Christ Jesus," since the grace of final perseverance comes from Him alone. Again the apostle asks that our "charity may more and more abound in knowledge and in all understanding"; that we "may approve the better things"; that we "may be sincere and without offense unto the day of Christ " (Epistle). For in this dread moment: If the Lord "shall observe iniquities ... who shall endure it?" (Introit).

But the Lord is the "helper and protector" of them that hope in Him. (Alleluia), for there is propitiation with the God of Israel (Introit, Secret). And we shall ourselves experience this mercy if we are merciful to our neighbour. " How good and how pleasant a thing it is for brethren to dwell together in unity," says the Gradual. Especially must we be found in prayer in the hour of danger, for if we cry to the Lord, He will hear us. (Communion).

The prayer, in the highest degree social and fraternal, to which almighty God is especially attentive is the prayer of His bride the Church. He hears and answers her, like Assuerus the king, when as the Offertory reminds us, Esther his wife approached him that he might save God's people from death" (See the nineteenth Sunday after Pentecost). 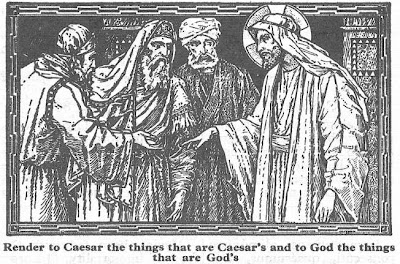 Continuation of the holy Gospel according to St. Matthew.
At that time, the Pharisees went and consulted among themselves, how to ensnare Jesus in His speech. And they send to Him their disciples, with the Herodians, saying: Master, we know that Thou art a true speaker, and teachest the way of God in truth, neither carest Thou for any man, for Thou dost not regard the person of the men. Tell us therefore, what dost Thou think? Is it lawful to give tribute to Caesar, or not? But Jesus knowing their wickedness, said: Why do you tempt Me, ye hypocrites ? Show Me the coin of the tribute. And they offered Him a penny. And Jesus saith to them : Whose image and superscription is this? They say to Him : Caesar's. Then He saith to them: Render therefore to Caesar the to God the things that are God's.
(St Matthew 22:15-21)

Ego clamavi, quoniam exaudisti me, Deus: inclina aurem tuam, et exaudi verba mea.
I have cried for Thou, O God, hast heard me: O incline Thy ear unto me, and hear my words.
(Communion, from Psalm 16:6)