Office for the Dead - from Battifol

HISTORY OF THE ROMAN BREVIARY
by Pierre Battifol 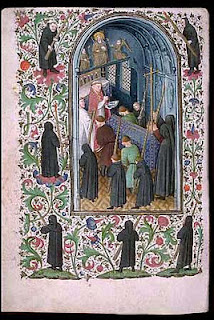 The Penitentials of Theodore of Canterbury (d. 690), and Egbert of York (d. 766), which are both based on Roman use in the seventh century, bear witness that at that period there was no vigil of the dead at Rome. 'According to the Church of Rome,' so we read in them, 'the custom is to carry the dead to the church, to anoint his breast with chrism, and to say Mass for him; then to carry him to the grave with chanting (cum cantatione portare ad sepulturam), and when he has been laid in the tomb to say a prayer over him. Mass is said for him on the day of burial itself, on the third, ninth, and thirtieth day after, and on the anniversary if it is desired.' [Theod. Paenit. 5; Egbert, Paenit. i. 36.] That is all, and there is no question of a vigil of any kind. This is in the seventh century.

To find the Office of the Dead established we must come down to the eighth century and to the time of Amalarius. Then only alongside of the ordo sepulturae do we find a real canonical Office for the Dead, officium pro mortuis. [Amal. De Ord. Antiph. 65, 79.] The Antiphonary of S. Peter's and the Ordines Romani [Mabillon, Mus. Ital. tom. ii. pp. 155 sqq. (Ordo X).] give us both its text and its rubrics. The body of the departed has been brought in the evening to the basilica, say of S. Peter. They have traversed, amid the tolling of bells, the fore-court of the church, and they have stopped at the threshold of that one of its five doors which is called 'Gate of Judgment' (porta iudicii), because it is the door of the dead; there they have chanted the psalm Miserere, with two antiphons:

[Tommasi, tom. iv. p. 103. 'Thou who knowest the secrets of all hearts, cleanse Thou me from my sin. Grant me time to cry in penitence "Against Thee have I sinned."' - 'Bring him in, O Lord, to the mountain of Thine inheritance, even to the sanctuary which Thine hands have prepared, O Lord.'

The door has been opened, the body has been brought into the 'sanctuary,' and the office begins. It is a vigil, in the fall and true sense of the term, and, like every such vigil, includes Vespers, three Nocturns, and Lauds. Here we have the genuine office of the Boman clergy, clear of all monastic influence. The Vespers have their five psalms with antiphons, the versicle and response, the Magnificat with its antiphon, the Kyrie eleison, and the Lord's Prayer. No hymn, no short lesson: it is entirely the Roman Office in its purest state. The three nocturns begin without the invitatory psalm: there is no place for Venite exultemus in a funeral vigil. Each nocturn includes three psalms with antiphons, and three lessons from the book of Job, each lesson being followed by a respond, also taken from the same book. The ninth respond is Ne recorderis peccata mea: our admirable Libera me, Domine, does not belong to the Roman Office of the time of Charlemagne. The Nocturns are followed by Lauds: five psalms with antiphons, the versicle and response, the Benedictus with its antiphon, the Kyrie eleison, and the Lord's Prayer. The vigil of the dead is ended: in the morning Mass will be sung before the body, and followed by the diaconia, or absolutio as it was afterwards called. Then comes the burial.

This pathetic office for the vigil of the dead, having been created at Rome at the beginning of the eighth century at latest, was received at the same time as the rest of the canonical Roman Office by the Frankish Churches, before the end of the same century. No essential modification was introduced; beyond the Alps it remained what the Roman liturgy had made it, and, what is most noticeable, in all ages without hymns. But instead of being, as it was at Rome, only an accompaniment of solemn obsequies, the prelude to the 'sacrificium pro dormitione,' or Mass at the burial, it was considered as the necessary complement of every solemn Mass for the dead, whether on the day of burial, the anniversary, or at other times. From this the vigil of the dead got in time to be celebrated daily, both in monasteries, and by the chapters of the secular clergy, and even in parish churches. ' Agenda mortuorum per totum annum, celebratur,' writes John of Avranches. [Jo. Abrin. De Off. Eccl. p. 71.] At Cluny the Vespers of the dead were said after Vespers of the day, and Lauds of the dead after Lauds. As for the Nocturns of the dead, they were recited every night after supper, in choir:
Post coenam cum psalmo L. [Miserere] in ecelesiam reditur . . .; agitur officium vel quod a nostratibus vigilia vulgo appellator . . .; ipsum quoque officium nunquam agitur modo, nisi cum novem lectionibus et responsoriis, et collectis quae ipsum officium sequuntur.'

It is, as we see, the entire nocturnal office, with its nine psalms, nine lessons, and nine responds. The writings of S. Peter Damian furnish us with proof that this daily Office of the Dead was, in the eleventh century, practised in Italy just as it was in France, and that certain clergy, who found it too heavy a burden to recite both the canonical Office of the day and the Office of the Dead, even confined themselves to the latter, as being shorter and simpler. He relates the story of 'a certain brother' who was accustomed to say neither the Office of the Season nor of saints' days, but only the Office of the Dead. Well, he died, and as soon as he appeared before the tribunal of God, the devils made accusation against him with vehemence, that, neglecting the rule of the ecclesiastical state, he had refused to render to God His due, in the matter of the Divine Service. But the Virgin Mary and along with the Blessed Queen of the world, all the choirs of saints intervened, to save the soul of this friend of the dead. [Petr. Damian. Opusc. xxxiv. pt. 2. No. 5.] So at least the story was told to S. Peter Damian by a tender-hearted visionary, his friend the Bishop of Cumae, not that either of them had any intention of encouraging the daily recitation of the Office of the Dead to the prejudice of the canonical hours, 'eclesiasticae institutionis regulam.'

Here is another legend of the same period. A pilgrim of Aquitaine, returning from Jerusalem, lost his way one day, and found himself close to a barren and desolate little islet, inhabited by a hermit. This holy man extended hospitality to the wandering pilgrim, and asked him, since he belonged to Aquitaine, if he knew a monastery called Cluny, and its abbot, Odilo. The pilgrim replied that he did. 'Listen, then,' said the hermit; 'in this place we are quite close to the regions where the souls of sinners undergo the temporal penalty of sins committed on earth; and from where we are we can hear them lamenting that the faithful, and, in particular the monks of Cluny, are so niggardly as to offering up prayers for the mitigation of their sufferings and their release from them. In God's name, good pilgrim, if you ever get back to your country, seek out the abbot of Cluny, and beseech him, from me, to redouble - both he and his congregation - their prayers, vigils, and almsgivings, for the deliverance of these souls in pain, and so increase the joy of heaven and the grief of the devil.' On hearing this from the pilgrim, S. Odilo (d. 1049) ordained that, in all the monasteries of his congregation, the morrow of the feast of All Saints should be devoted to the commemoration of all the faithful departed [Jotsald, Vita Odil. ii. 13 ; Udalric, Consuetud. i. 42.] - one more liturgical creation of the abbey of Cluny, propagated thence throughout the West, and finally received at Rome: one more proof, the last we shall give, of the preponderating influence of Cluny on the formation of the 'Modernum Officium.'
Posted by davidforster at 18:00