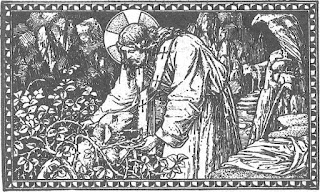 To-day's liturgy proclaims God's mercy to men. Like our Lord, who came "not to call the just, but sinners", the Holy Ghost who carries on Christ's work in our hearts comes to set up the kingdom of God in sinful souls. This is the Church's teaching in breviary and missal to-day.

The breviary lessons are concerned with the history of Saul. After Heli's death the Israelites obeyed Samuel like a new Moses but when he became old they asked for a king. There was living, at that time, in the tribe of Benjamin a man named Cis, who had a son called Saul. No boy in Israel was his equal in appearance. His father's asses having gone astray, Saul went to look for them and coming to Ramatha, where Samuel lived, he said to himself: " The man of God will tell me where I shall find them". No sooner was he in Samuel's presence, than God told the latter that this was the man whom He had chosen to reign over His people. Samuel told Saul that the asses he had lost three days ago had been found. The next day Samuel took a horn of oil and having poured it on Saul's head, kissed him and said: "Behold the Lord hath anointed thee to be prince over His inheritance : and thou shalt deliver His people out of the hands of their enemies that are round about them." "Saul," says St. Gregory, "was only anointed with a little vessel of oil because lie was to be rejected in the end." For since the vessel contained but a little oil, Saul received little, and he adds elsewhere: "In every respect Saul represents the obstinate and the proud." St. Gregory says that Saul, who was sent by his father "to look for the lost asses, is a type of our Lord whom His Father sent to seek lost souls". He goes on to say that enemies are round about as blessed Peter said: "Your adversary the devil, as a roaring lion, goeth about." Saul was anointed to deliver his people from the enemies who were attacking them, but Christ the Anointed in the highest sense, came to deliver us from the devils who seek our destruction. This enables us to understand the choice of the epistle and Gospel of this Mass. The gospel shows us the lost sheep and the Good Shepherd seeking it, placing it on His shoulders and returning with it to the fold. It is one of the oldest representations in Christian iconography found in the catacombs. The epistle explains the dangers to which men, expressed by the lost sheep, are exposed. "Watch because your adversary whom resist ye, strong in faith" (Epistle). He will shelter you from the attack of your enemies (Gradual), who is the protector of all who hope in Him (Collect), and who never forsakes them that seek Him (Offertory) Remembering Saul's fate who, at first little in his own eyes, afterwards became puffed up with pride on account of his royal dignity, disobeyed God and would not acknowledge his faults, let us "humble ourselves under the mighty hand of God" (Epistle), saying: "O my God, look upon me and have mercy ... in Thee I put my trust; let me be not ashamed (Introit): and since without Thee nothing is strong, nothing is holy, make us in such manner to use temporal goods, that we lose not those which are eternal (Collect). Give us, then, an immovable constancy in the midst of temptation of every kind (Epistle).

Respice in me, et miserere mei, Domine: quoniam unicus, et pauper sum ego: vide humilitatem meam, et laborem meum: et dimitte omnia peccata mea, Deus meus. * Ad te, Domine, levavi animam meam: Deus meus, in te confido, non erubescam.
Look Thou upon me, O Lord, and have mercy on me; for I am alone and poor. See my abjection and my labour; and forgive me all my sins, O my God. * To Thee, O Lord, have I lifted up my soul: in Thee, my God, I put my trust; let me not be ashamed.
(Introit: Psalm 24:16-18,1-2)

Protector in te sperantium, Deus, sine quo nihil est validum, nihil sanctum: multiplica super nos misericordiam tuam, ut, te rectore, te duce, sic transeamus per bona temporalia, ut non amittamus aeterna.
O God, the protector of all that trust in Thee, without whom nothing is strong, nothing is holy, multiply Thy mercies upon us; that having Thee for our ruler and guide, we may so pass through things temporal, that we finally lose not those which are eternal.
(Collect)

Sequentia sancti Evangelii secundum Lucam.
In illo tempore: Erant appropinquantes ad Jesum publicani, et peccatores, ut audirent illum. Et murmurabant pharisaei et scribae, dicentes: Quia hic peccatores recipit, et manducat cum illis. Et ait ad illos parabolam istam, dicens: Quis ex vobis homo, qui habet centum oves: et si perdiderit unam ex illis, nonne dimittit nonagintanovem in deserto, et vadit ad illam, quae perierat, donec inveniat eam? Et cum invenerit eam, imponit in humeros suos gaudens: et veniens domum, convocat amicos, et vicinos, dicens illis: Congratulamini mihi, quia inveni ovem meam, quae perierat? Dico vobis, quod ita gaudium erit in caelo super uno peccatore poenitentiam agente, quam super nonagintanovem justis, qui non indigent poenitentia. Aut quae mulier habens drachmas decem, si perdiderit drachmam unam, nonne accendit lucernam, et everrit domum, et quaerit diligenter, donee inveniat ? Et cum invenerit, convocat arnicas et vicinas, dicens: Congratulamini mihi, quia inveni drachmam, quam perdideram? Ita dico vobis: gaudium erit coram Angelis Dei super uno peccatore poenitentiam agente.
Continuation of the Holy Gospel according to St. Luke.
At that time, the publicans and sinners drew near unto Jesus to hear Him: and the Pharisees and Scribes murmured, saying: This man receiveth sinners and eateth with them. And He spoke to them this parable, saying: What man is there of you that hath a hundred sheep, and if he shall lose one of them, doth he not leave the ninety-nine in the desert, and go after that which was lost, until he find it? And when he hath found it, lay it upon his shoulders rejoicing, and coming home, call together his friends and neighbours, saying to them: Rejoice with me, because I have found my sheep that was lost? I say to you, that even so there shall be joy in heaven upon one sinner that doth penance, more than upon ninety-nine just who need not penance. Or what woman having ten groats, if she lose one groat, doth not light a candle, and sweep the house, and seek diligently until she find it? And when she hath found it, call together her friends and neighbours, saying: Rejoice with me, because I have found the groat which I had lost? So I say to you, there shall be joy before the angels of God upon one sinner doing penance.
(Gospel: Luke 15:1-10)