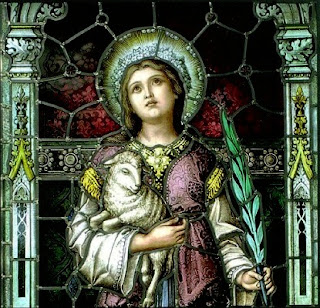 Today's mass commemorates one of the most touching and glorious triumphs of Jesus over the world. Agnes, the daughter of one of the noblest families of Rome, goes to meet the Spouse (Gospel) and consecrates herself to Him at the age of ten. Jesus in return works through her wonderful prodigies" (Gradual). The son of the prefect of Rome asks for her hand in marriage and she replies: "The one to whom I am betrothed is Christ whom the angels serve."

Then they attempted to dishonour her by violence, but "God delivered her body from perdition" (Epistle). She was thrown on a burning pile, but "the flames did her no harm" (ibid.).

When condemned to be beheaded, she thus encouraged the hesitating executioner: "Strike without fear, for the bride does her spouse an injury if she makes him wait." At the age of thirteen (about 304) this weak girl confounds the powerful of the earth (Introit).

Over her tomb, in the Via Nomentana, was built the magnificent basilica which still exists, and her name, towards the end of the fifth century, was inscribed in the Canon of the Mass with those of five other female martyrs (second list.)

A Benedictine convent is attached to the bssilica of St. Agnes. On this altar, every year on January 21st, the Abbot General of the Canons Regular of Lateran blesses two lambs. Then they are brought to the Vatican, where the Pope blesses them again and entrust them to the nuns of St. Agnes's, who rear them till Good Friday, and weave from their wool the palliums, the insignia of the archbishops, and also, by privilege, of a few bishops. The pallium consists in a narrow band of white woollen cloth and is worn over the chasuble.

Me exspectaverunt peccatores, ut perderent me: testimonia tua, Domine, intellexi: omnis consummationis vidi finem: latum mandatum tuum nimis. * Beati immaculati in via: qui ambulant in lege Domini.
The wicked have waited for me to destroy me: but I have understood Thy testimonies, O Lord: I have seen an end of all perfection: The commandment is exceeding broad. * Blessed are the undefiled in the way: who walk in the law of the Lord.
(Psalm 118:95-96,1 from the Introit of Mass)

O Almighty and everlasting God, who dost choose the weak things of the world, to confound the strong, mercifully grant, that we who celebrate the solemnity of blessed Agnes, Thy virgin and martyr, may experience her intercession with Thee.
(Collect)

Beáta Agnes in médio flammárum expánsis mánibus orábat: Te déprecor, omnípotens, adoránde, colénde, Pater metuénde, quia per sanctum Fílium tuum evási minas sacrílegi tyránni, et carnis spurcítias immaculáto calle transívi: et ecce vénio ad te, quem amávi, quem quaesívi, quem semper optávi.
Blessed Agnes, in the midst of the fire, stretched forth her hands unto the Lord and said: I call on thee, O Father Almighty, august and dread, for by thy holy Son's protection, I did escape the threats of a godless tyrant, and was made to walk with clean feet  through the filthy slough of fleshly sin; and now behold, I come unto thee, whom I have loved, whom I have sought, whom I have alway desired.
(Antiphon from Vespers)

Ecce, quod concupívi, jam vídeo: quod sperávi jam téneo: ipsi sum juncta in caelis, quem in terris pósita, tota devotióne diléxi.
Lo, what I desired, I now do see; what I did hope for I now possess; now am I united in heaven to him whom I loved with my whole heart upon earth.
(Antiphon from Lauds)