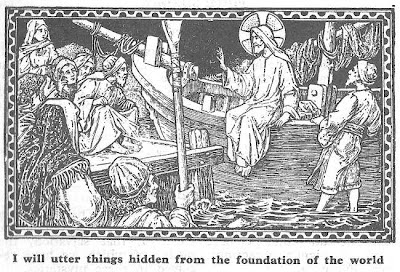 "God," says St. Paul in the night office for this Sunday, "hath spoken to us by His Son, whom He hath appointed heir of all things." Who being the brightness of His glory and the figure of His substance and upholding all things by the word of His power, making purgation of sins, sitteth on the right hand of the majesty on high. "To which of the angels hath he said at any time: Thou art my Son, to-day have I begotten Thee!" And again, when He bringeth the first begotten into the world he saith: "And let all the angels of God adore Him " (First Nocturn, Introit).

St. Athanasius remarks that the Apostle affirms the superiority of Christ to the angels, by way of showing the difference between the nature of the Son and that of His creatures (Second Nocturn). Similarly the Mass for to-day brings out the divinity of our Blessed Lord. He is God because He utters things hidden in God and unknown to the world (Gospel). His word, compared by Him to a tiny seed cast into the field of the world, and to a little leaven in the lump, is divine because it calms our passions and brings forth in our hearts those marvels of faith, hope and charity of which we read in the Epistle.

Of the Church, stirred to greater effort by our Lord's words, we have an excellent figure in the three measures of meal, the whole of which was leavened by the expanding force of the yeast (Gospel), and in the mustard tree, the largest of its kind, where the birds of the air gladly come for shelter.

We must constantly meditate on our Lord's doctrine, that like leaven it may pervade and transform our hearts, and like the mustard tree may spread abroad its fruits of holiness in those of our neighbour.

May God's kingdom, to which Christ its King has called us, be extended even more and more.

Praesta, quaesumus, omnipotens Deus: ut semper rationabília meditántes, quae tibi sunt plácita et dictis exsequámur, et factis.
Grant, we beseech Thee, almighty God, that ever meditating on the truths Thou hast proposed for our intelligence, we may in every word and work of ours, do that which is pleasing to Thee. (Collect)

The continuation of the holy Gospel according to Matthew.

At that time, Jesus spoke to the multitudes this parable: "The kingdom of Heaven is like to a grain of mustard seed, which a man took and sowed in his field: but when it is grown up, it is greater than all herbs and becomes a tree, so that the birds of the air come and dwell in the branches thereof." Another parable He spoke to them: "The kingdom of Heaven is like to leaven, which a woman took and hid in three measures of meal, until the whole was leavened." All these things Jesus spoke in parables to the multitudes: and without parables He did not speak to them: that it might be fulfilled which was spoken by the prophet, saying: "I will open my mouth in parables, I will utter things hidden from the foundation of the world."
(St Matthew 13:31-35)
Posted by davidforster at 22:36