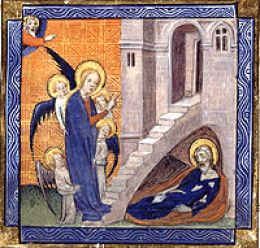 St. Alexius was born at Rome, towards 350, of a wealthy family; his father being the Senator Euphemian. Guided by the Holy Ghost, he renounced his patrimony and piously visited as a pilgrim the sanctuaries of the East. He died in the fifth century under the Pontificate of Innocent I.

His body was buried in the church which bears his name on Mount Aventine. He is honoured there with St. Boniface, to whom the Church had originally been dedicated.


Os justi meditabitur sapientiam, et lingua ejus loquetur judicium; lex Dei ejus in corde ipsius. * Noli aemulari in malignantibus: neque zelaveris facientes iniquitatem.
The mouth of the just shall meditate wisdom, and his tongue shall speak judgement: the law of his God is in his heart. * Be not emulous of evildoers: nor envy them that work iniquity.
(Psalm 36:30-31,1 from the Introit of Mass)

O God who dost gladden us by the annual solemnity of blessed Alexius, Thy confessor, mercifully grant that we who celebrate his heavenly birthday may also imitate his example.