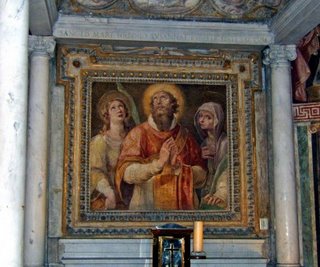 Like St. Laurence, Tiburtius, son of the prefect of Rome, was thrown into the flames. Armed with the sign of the cross, the martyr walked full of confidence on the burning coal. He was then led out of the town and beheaded on the Lavicanian Way in 286.

On the same day Susanna, a maiden of high birth who, on account of her vow of virginity had refused to marry Galerius Maximus, son of the Emperor Diocletian, was beheaded in her house about 295.

Her body is preserved with that of her father, St. Gabinus and that of St. Felicitas, mother of the seven martyrs honoured July 10, in the church of St. Susanna, where the Station is held on the Saturday of the third week in Lent.

Salus autem justorum a Domino: et protector eorum est in tempore tribulationis. * Noli aemulari in malignantibus: neque zelaveris facientes iniquitatem.
But the salvation of the just if from the Lord: and He is their protector in the time of trouble. * Be not emulous of evildoers; nor envy them that work iniquity.
(Psalm 36:39,1 from the Introit of Mass)

Sanctorum Martyrum tuorum Tiburtii et Susannae nos, Domine, foveant continuata praesidia; quia non desinis propitius intueri, quos talibus auxiliis concesseris adjuvari.
May the unfailing protection of Thy holy martyrs Tiburtius and Susanna comfort us, O Lord; for never dost Thou turn away Thine eyes of mercy from those to whom such help is given. Through our Lord.
(Collect)