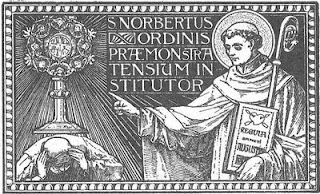 Norbert, born in 1080 at Xanten near Cologne, was educated at the Emperor's Court. One day when he was riding accompanied by a servant he was surprised by a hurricane. Like St. Paul, on the way to Damascus, he heard a voice calling him to the service of the Church. At this moment a crash of thunder threw him to the ground. He got up again, determined to consecrate himself to God. Having been admitted to holy orders, he devoted himself entirely to preaching the word of God (Collect).

Later on, guided by the Holy Ghost, who continually sanctifies the Church through the centuries, he chose a retreat in a deserted spot, called Premontre, not far from Soissons, and founded there the Order of Premonstratensians (Collect). At the death of this holy Founder, this new family numbered at this place alone over one thousand Canons Regular. St. Norbert shared the full priesthood of Christ, being anointed archbishop of Magdeburg (Introit, Epistle, Gradual, Offertory). He helped Pope Innocent II to triumph over the anti-pope Anacletus and was the friend of St. Bernard. In the Netherlands, he defended Eucharistic worship against the heresy of Tanchelmus (see engraving).

After having put to full profit the talents with which God had entrusted him for the government of his religious family and diocese (Gospel, Communion), "This man of God," says the breviary, "full of the Holy Ghost and laden with merits, fell asleep in the Lord, A.D. 1134."

Let us ask of God "to practise what St. Norbert taught by word and by example" (Collect).


Statuit ei Dominus testamentum pacis, et principem fecit eum: ut sit illi sacerdotii dignitas in aeternum. * Memento Domine David et omnis mansuetudinis ejus.
The Lord made to him a covenant of peace, and made him a prince; that the dignity of the priesthood should be to him for ever. * O Lord, remember David: and all his meekness.
(Ecclus. 45:30 and Psalm 131:1. From the Introit at Mass).

Deus, qui beatum Norbertum, Confessorem tuum atque Pontificem, verbi tui praeconem eximium effecisti, et per eum Ecclesiam tuam nova prole fecundasti: praesta, quaesumus; ut, ejusdem suffragantibus meritis, quod ore simul et opere docuit, te adjuvante, exercere valeamus.
O God, who didst raise up blessed Norbert, Thy confessor and bishop, to be an illustrious preacher of Thy word, and through him didst beget another Order in Thy church; grant, we beseech Thee, that through the pleading of his merits, we may practise by Thy grace that which he taught both by word and deed.