The Ascension of our Lord

The Ascension of our Lord 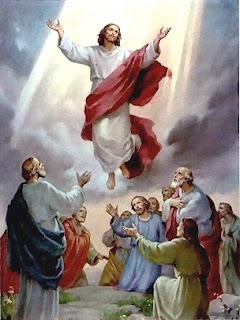 It is in the basilica of St. Peter, dedicated to one of the chief witnesses of our Lord's ascension, that this mystery which marks the end of our Lord's earthly life, is "this day" (Collect) kept.

In the forty days which followed His resurrection, our Redeemer laid the foundations of His Church to which He was going to send the Holy Ghost.

All the Master's teachings are summed up in the Epistle and Gospel for to-day. Then He left this earth and the Introit, Collect, Epistle, Alleluia, Gospel, Offertory, Secret, Preface and Communion celebrate His glorious ascension into heaven, where the souls He had freed from Limbo escort Him (Alleluia), and enter in His train into the heavenly kingdom, where they share more fully in His Divinity.

The ascension sets before us the duty of raising our hearts to God. So, in the Collect, we are led to ask that we may dwell with Christ in spirit in the heavenly realms, where we are called one day to dwell in our risen bodies.

During the octave the Credo is said: "I believe in one Lord Jesus Christ, the only-begotten Son of God ... Who ascended into heaven ... He sitteth at the right hand of the Father." The Gloria speaks in the same sense: "O Lord Jesus Christ, the only-begotten Son ... Who sittest at the right hand of the Father, have mercy upon us." In the Proper Preface which is said until Pentecost, we give thanks to God because His Son, the risen Christ, "after His resurrection appeared and showed Himself to all His disciples; and while they beheld Him, was lifted up into heaven". In the same way, during the whole octave, a Proper Communicantes of the feast is said, in which the Church reminds us that she is keeping the day on which the only-begotten Son of God set at the right hand of His glory the substance of our frail human nature, to which He had united Himself in the mystery of the Incarnation.

We are reminded daily in the liturgy at the Offertory Suscipe Sancta Trinitas, and in the Canon Unde et memores, that at our Lord's command the Holy Sacrifice is being offered in memory of the "blessed passion of the same Christ Thy Son our Lord," and also His resurrection from hell and His glorious ascension into heaven.

The truth is that man is saved only by the mysteries of the passion and resurrection united with that of the ascension. "Through Thy death and burial, through Thy holy resurrection, through Thy admirable ascension, deliver us, O Lord " (Litany of the Saints).

Let us offer the divine Sacrifice to God in memory of the glorious ascension of His Son (Suscipe, Unde et memores); while we nourish within our souls an ardent desire for heaven, that "delivered from present dangers," we may "attain to eternal life" (Secret).

Continuation of the holy Gospel according to St. Mark.
At that time Jesus appeared to the eleven as they were at table : and He upbraided them with their incredulity and hardness of heart, because they did not believe them who had seen Him after He was risen again. And He said to them: Go ye into the whole world and preach the gospel to every creature. He that believeth and is baptized shall be saved: but he that believeth not shall be condemned. And these signs shall follow them that believe: In My name they shall cast out devils; they shall speak with new tongues; they shall take up serpents; and if they shall drink any deadly thing, it shall not hurt them; they shall lay their hands upon the sick, and they shall recover. And the Lord Jesus, after He had spoken to them, was taken up into heaven and sitteth on the right hand of God. But they going forth preached everywhere, the Lord working withal, and confirming the word with signs that followed.
(St Mark 16:14-20)

From the Catholic Encyclopaedia on Ascension Day: http://www.newadvent.org/cathen/01767b.htm
Posted by davidforster at 00:30