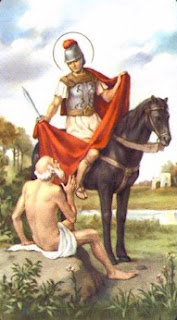 St Martin is the first bishop and confessor honoured by the Church in the west. In Gaul, the liturgy gave him a rank equal to the apostles, for he was the principal apostle of Gaul. His feast was of obligation, with an octave and popular rejoicings.


St Martin, born at Savaria in Pannonia, came to Gaul as a soldier. While still a catechumen, he one day, near Amiens, gave part of his cloak to a poor man who asked him for an alms in the name of Christ. During the following night Jesus appeared to him clothed in this half of his cloak and said to him: "Martin, a simple catechumen, covered me with this garment."


At the age of 18, he was baptized, and having become a disciple of St Hilary, he built in the desert of Liguge, near Poitiers, the first monastery in Gaul. Made Bishop of Tours, he founded the famous abbey of Marmoutiers or Martin's Monastery, where eighty monks imitated the lives of the hermits of Thebaid.


He died, aged over eighty, at Candes, nears Tours, on 8th November, 397. His tomb became famous through many miracles, and attracted large pilgrimages. Roma has a church of SS Sylvester and Martin, better known as St Martino ai Monti, where the Station is held on the Thursday of the fourth week in Lent.

Statuit ei Dominus testamentum pacis, et principem fecit eum: ut sit illi sacerdotii dignitas in aeternum. * Memento Domine David et omnis mansuetudinis ejus.
The Lord made to him a covenant of peace, and made him a prince; that the dignity of the priesthood should be to him for ever. *O Lord, remember David: and all his meekness.
(Ecclus. 45:30 and Psalm 131:1. From the Introit at Mass).


O God, who knowest that we stand not by any strength of our own, mercifully grant that by the intercession of blessed Martin, Thy confessor and bishop, we may be kept from all harm.
(Collect)


There are a number of popular traditions associated with this day, which is called Martinmas. It is sometimes considered the first day of winter, though "St Martin's summer" is a spell of fine weather at this time. In some countries it is considered to be a sort of harvest festival - the new wine is tasted, and a goose is cooked, with much festivity.