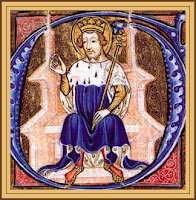 Edward, called the Confessor, was a grandson of St. Edward, king and Martyr.


When he was raised to the throne of England "it was seen," says a historian, "what can be done by a king who is the true father of his subjects. All those who approached him endeavoured to regulate their lives according to his. Neither ambition, nor the love of riches, nor any of the passions which are unfortunately so common among courtiers, were known at his court." He was everywhere called the father of the orphans and of the poor, and he was never happier than when he could distribute alms (Epistle). He always granted what was requested of him in the name of St. John the Evangelist. He died A.D. 1066.

When he was raised to the throne of England he was everywhere called the father of the orphans and of the poor. He died on 5th January 1066. His reign was popularly remembered as a time of justice and mercy by subsequent generations.

13th October is the anniversary of the translation of his relics in 1163, when his incorrupt body was translated into Westminster Abbey, which he had founded, by St Thomas of Canterbury, in the presence of King Henry II.