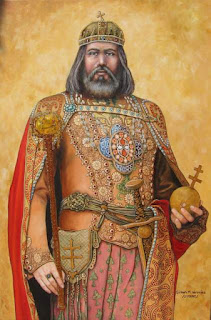 A descendant of those proud and terrible invaders, the Huns, Stephen was chosen by God to win over his subjects to Christ and His vicar. He was given the baptismal name of Stephen, in consequence of his mother having a vision of the Martyr St. Stephen, who foretold her that he would convert Hungary, whose first king he became when the Pope had raised the country into a kingdom. Having married the sister of the Emperor St. Henry, he surrounded himself, to govern his kingdom, with men of tried holiness and prudence. He passed entire nights in the contemplation of heavenly things (Introit), practised the greatest austerities, and seconded by the queen, his pious spouse, gave abundant alms (Epistle) to widows, and churches. The greatness of his zeal for the propagation of the faith justly won for him the title of Apostolic King or of Apostle of Hungary, and deservedly obtained for him from the Holy See the privilege, transmitted to his successors, to have the cross borne before him. He built a large basilica in honour of Mary, whom he proclaimed Patroness of Hungary. "His zeal in propagating and strengthening the faith in his kingdom earned for him the glory of a heavenly crown" (Postcommunion). He died in 1038 on the "Day of the great Lady," as the feast of the Assumption was called by the Hungarians, in virtue of an edict of the holy king.

Os justi meditabitur sapientiam, et lingua ejus loquetur judicium: lex Dei ejus in corde ipsius. * Noli aemulari in malignantibus: neque zelaveris facientes iniquitatem.
The mouth of the just shall meditate wisdom, and his tongue shall speak judgement: the law of his God is in his heart. * Be not emulous of evildoers: nor envy them that work iniquity.
(Psalm 36:30-31 and 1 from the Introit of Mass)

Concede, quaesumus, Ecclesiae tuae, omnipotens Deus: ut beatum Stephanum Confessorem tuum, quem regnantem in terris propagatorem habuit, propugnatorem habere mereatur gloriosum in caelis.
O almighty God, whose Church, while he ruled upon earth, possessed in blessed Stephen, Thy confessor, a mighty promoter; grant that she may yet find in him a glorious defender in heaven.
(Collect)

From the Catholic Encyclopaedia on St Stephen of Hungary: http://www.newadvent.org/cathen/14287a.htm
Posted by davidforster at 00:30