The Seven Holy Founders of the Servite Order, Confessors 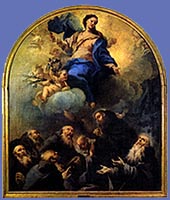 To-day the liturgy honours seven noble Florentines who "in 1223 enriched the Church with a new religious family " (Collect). They received by a providential circumstance, from the mouth of little children (Introit) the name of "Servants of Mary." Illustrious by their birth, these founders became still more so by the salutary influence of their Order (Communion) in France, Germany and Poland. "Their race endures for ever and their glory shall never be dimmed " (Epistle), for they survive in their disciples. Leaving everything, they retire to Monte Senario, near Florence, atone by their austerities for the sins of guilty men and, clothed in a mourning habit shown to them by the Virgin, they constantly meditate on the Passion of Jesus and the dolours of Mary at the foot of the Cross (Collect, Postcommunion).

"Burning with love for the sorrowful Mother of Jesus" (Secret) "let us join in the tears" (Collect) of the Saints whom we honour to-day, in order that "deserving to enjoy the fruits of Christ's Redemption" (Postcommunion) "we may also have a share in their joys" (Collect).

Justi decantaverunt, Domine, nomen sanctum tuum, et victricem manum tuam laudaverunt pariter:quoniam sapientia aperuit os mutum, et linguas infantium fecit disertas. * Domine Dominus noster, quam admirabile est nomen tuum in universa terra!
The just sang to Thy holy name, O Lord, they praised with one accord Thy victorious hand. For wisdom opened the mouth of the dumb, and made the tongues of infants eloquent. * O Lord our Lord, how admirable is Thy name in the whole earth.
(Wisdom 10:20-21 and Psalm 8:2 from the Introit of Mass)

Domine Jesu Christe, qui, ad recolendam memoriam dolorum sanctissimae Genitricis tuae, per septem beatos Patres nova Servorum ejus familia Ecclesiam tuam foecundasti: concede propitius; ita nos eorum consociari fletibus, ut perfruamur et gaudiis.
O Lord Jesus Christ who, in order to renew the memory of the sorrows of Thy most holy Mother, hast through the seven blessed fathers enriched Thy Church with the new Order of Servites; mercifully grant that we may be so united in their sorrows as to share in their joys.
(Collect)