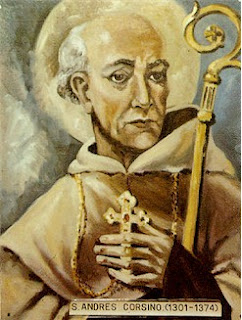 St. Andrew, of the noble family of Corsini, was born at Florence, and from his birth was consecrated to the Blessed Virgin. His mother dreamed that she had given birth to a wolf which, on entering into the Carmelite church, was suddenly changed into a lamb. Her son indeed led a dissolute life in his youth. But Jesus exerted His redeeming power over him and Andrew entered the Carmelite order and soon became its head in Tuscany (Communion).

Having thus turned to good use the talents with which God had favoured him, he rose to a still higher dignity (Gospel) and as bishop of Fiesole he had a share in the priesthood of Christ, and accomplished His work of reconciling souls with God. Thus, having been sent to Bologna as legate by Urban V, he succeeded by his great prudence in extinguishing the burning hatred which had armed the citizens against each other (Epistle). The Blessed Virgin foretold him his death, which occurred in 1373.

Made wolves by sin, let us like St. Andrew become lambs by penance, in order that, "following in the footsteps of this holy confessor, we may obtain the same rewards" (Collect).

Statuit ei Dominus testamentum pacis, et principem fecit eum: ut sit illi sacerdotii dignitas in aeternum. * Memento Domine David et omnis mansuetudinis ejus.
The Lord made to him a covenant of peace, and made him a prince; that the dignity of the priesthood should be to him for ever. * O Lord, remember David: and all his meekness.
(Ecclus. 45:30 and Psalm 131:1. From the Introit at Mass).

Deus, qui in Ecclésia tua nova semper instáuras exémpla virtútum: da pópulo tuo beáti Andréae Confessóris tui atque Pontíficis ita sequi vestígia; ut assequátur et praemia.
O God, who in every age dost manifest in Thy Church new examples of virtue; grant that Thy people may so follow in the footsteps of blessed Andrew, Thy confessor and bishop, that they may obtain the reward now enjoyed by him.
(Collect)