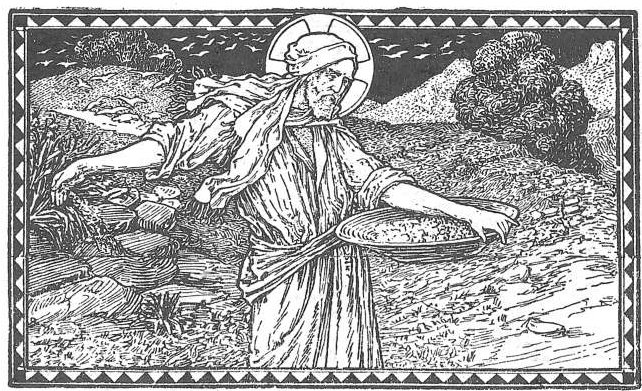 As on last Sunday and on those which follow until Passion Sunday the Church teaches us "to celebrate the Paschal Sacrament" by "the scriptures of both Testaments " (Prayer of Holy Saturday after 7th Prophecy).

Through the whole of this week the divine office is full of the thought of Noah. God seeing that man's wickedness was great upon the earth said, "I will destroy man whom I have created"; and He told Noah, "I will establish my convenant with thee and thou shalt enter into the ark."

For forty days and forty nights rain fell on the earth, while the ark floated on the waters which rose above the mountain tops and covered them; and in this whirlpool all men were carried away "like stubble" (Gradual); only Noah and his companions in the ark remaining alive. Then God remembered them and at length the rain ceased. After some time, Noah opened the window of the ark and set free a dove, which returned with a fresh olive leaf and Noah understood that the waters no longer covered the earth. And God told him, "Go out of the ark, thou and thy wife, thy sons and the wives of thy sons with thee" (Communion). And the rainbow appeared as a sign of reconciliation between God and men.

That his story is related to the Paschal mystery is shown by the fact that the Church reads it on Holy Saturday; and this is how she herself applies it, in the Liturgy, to our Lord and His Church. "The just wrath of the Creator drowned the guilty world in the vengeful waters of the flood, only Noah being saved in the ark. But then the admirable power of love laved the world in blood ". It was the wood of the ark which saved the human race and it is that of the Cross which in its turn, saves the world. "Thou alone," says the Church, speaking of the Cross, "hast been found worthy to be, for this shipwrecked world, the ark which brings safely into port." The open door in the side of the ark by which those enter who are to escape from the Flood, and who represent the Church, are as is explained in the liturgy, a type of the mystery of redemption; for on the Cross, our Lord had His sacred side open and from this gate of life, went forth the sacraments, giving true life to souls. Indeed the blood and water which flow from thence are symbols of the Eucharist and of Holy Baptism."

"O God, who by water didst wash away the crimes of the guilty world, and by the overflowing of the deluge didst give a figure of regeneration, that one and the same element might in a mystery be the end of vice and the origin of virtue: look, O Lord, on the face of Thy Church and multiply in her Thy regenerations, opening the fonts of baptism all over the world for the renovation of the Gentiles. "In the days of Noah," says St. Peter, "eight souls were saved by water, whereunto Baptism being of the like form, now saveth you also ."

On Maundy Thursday, when the Bishop blesses the holy oil from the olive-tree which is to be used for the sacraments, he says: "When of old the crimes of the world were atoned for by the waters of the Flood, a dove foreshadowing the gift to come, announced by an olive-branch the return of peace to the earth. And this indeed is made clear by its effects in latter times: when the waters of baptism having washed away all guilt of sin, the unction of the oil makes us joyous and serene." The Blood of Christ is the blood of the New Covenant, which almighty God has made with man, through His Son. "Thou," cries the Church, "who by an olive-branch didst command the dove to proclaim peace to the world." Peace is often mentioned in the Mass which is the memorial of the Passion, "Pax Domini sit semper vobiscum." And we shall find the collect for Easter Friday, speaking of the Paschal Sacrament, as the seal of reconciliation between God and men.

Above all, however, in his divinely appointed mission as father of all succeeding generations Noah is a figure of Christ; he was truly the second father of the human race and he remains the type of life continually renewed. We are told in the liturgy that the olive-branch by means of its foliage is a symbol of the prosperous fertility bestowed by almighty God upon Noah when he came forth from the ark, and the ark itself is called by St. Ambrose in to-day's office, the "seminarium," or nursery, that is, the place containing the seed of life which is to fill the world.

Now, Christ, much more than Noah, was the second Adam, peopling the world with a race of believing souls, faithful to God. On Holy Saturday, in the prayer following the second prophecy which is concerned with Noah, the Church humbly asks almighty God to "peacefully effect," by His eternal decree, "the work of human salvation," and to "let the whole world experience and see that what was fallen is raised up, what was old is made new," and that "all things are re-established, through Him from whom they received their first being, our Lord Jesus Christ." It was through the Word that God made the world in the beginning (last Gospel), and it is by the preaching of His Gospel that our Lord came to bring men to a new birth. "Being born again," says St. Peter, "not of corruptible seed, but incorruptible, by the word of God who liveth and reigneth for ever ... And this is the word which by the gospel hath been preached unto you."

From this we can see why to-day's Gospel is taken from the parable of the Sower, for "the seed is the word of God". If in Noah's days men perished, St. Paul tells us, it was because of their unbelief, while at the same time it was by faith that Noah "framed the ark ... by the which he condemned the world, and was instituted heir of the justice which is by faith."

In the same way, those who believe in our Lord's words will be saved.

According to St. Augustine's exposition, "as there were three floors in the ark, so there are three different spiritual harvests". In to-day's Epistle, St. Paul recounts all that he did and suffered in the course of preaching the faith to the Gentiles and indeed he, the Apostle to the Gentiles, was the outstanding preacher of the world. He is the "minister of Christ," that is, the one whom God had chosen to unfold to all nations the good news of the Incarnate Word. "Who will grant me," cries St. John Chrysostom, "to walk around St. Paul's body, to embrace his tomb, to behold the dust of that body which filled up what was lacking in Christ's sufferings, which bore the marks of his wounds, which everywhere spread abroad, like good seed, the preaching of the Gospel?" The Roman Church has fulfilled this desire, in the case of her own children, by making a station on this day to the basilica of St. Paul-without-the-walls. "Through the Church's neophytes," we read in the liturgy, "the earth is renewed, and thus renewed, she brings forth fruit as it were from the dead."

Exsurge, quare obdormis, Domine? Exsurge, et ne repellas in finem; quare faciem tuam avertis, oblivisceris tribulationem nostram? Adhaesit in terra venter noster: exsurge, Domine, adjuva nos, et libera nos. * Deus, auribus nostris audivimus: patres nostri annuntiaverunt nobis.
Arise, why sleepest thou, O Lord? Arise, and cast us not off to the end. Why turnest thou thy face away? and forgettest our tribulation? Our belly cleaveth to the earth. Arise, O Lord, help us, and deliver us. * We have heard, O God, with our ears: our fathers have declared to us thy wonders.
(Psalm 43:23-26,2 from the Introit of Mass)

Deus, qui conspicis quia ex nulla nostra actione confidimus: concede propitius, ut contra adversa omnia, Doctoris gentium protectione, muniamur.
O God, who seest that we place no confidence in anything we do: mercifully grant that, by the protection of the Doctor of the Gentiles, we may be defended against all adversity.
(Collect)

Sequel of the holy Gospel according to Luke.

At that time, when a very great multitude was gathered together, and hastened out of the cities to meet Jesus, he spoke by a similitude. A sower went out to sow his seed; and as he sowed, some fell by the way-side, and it was trodden down, and the fowls of the air devoured it. And other some fell upon a rock and as soon as it was sprung up, it withered away, because it had no moisture. And other some fell among thorns; and the thorns growing up with it, choked it. And other some fell upon good ground, and sprung up, and yielded fruit a hundred-fold. Saying these things he cried out: He that hath ears to hear, let him hear. And his disciples asked him what this parable might be. To whom he said: To you it is given to know the mystery of the kingdom of God; but to the rest in parables: that seeing they may not see, and hearing they may not understand. Now the parable is this: The seed is the word of God. And, they by the wayside, are they that hear; then the devil cometh, and taketh the word out of their hearts, lest believing they should be saved. Now they upon the rock, are they who when they hear, receive the word with joy: and these have no roots; for they believe for a while and in time of temptation fall away. And that which fell among thorns, are they who have heard, and going their way, are choked with the cares and the riches and pleasures of this life, and yield no fruit. But that on the good ground, are they who, in a good and perfect heart hearing the word, keep it, and bring forth fruit in patience.
(St Luke chapter 8)
Posted by davidforster at 00:30