Tuesday of the First Week in Lent

Tuesday of the First Week in Lent 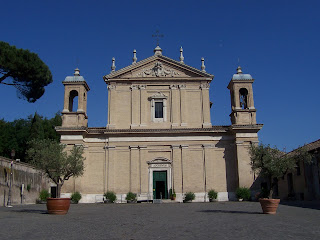 The Station is at the old church which, in the fourth century, was the only parish in the centre of Rome and in its wealthy quarter. Built at the foot of the Palatine, this church which owes its name to the Chapel of the Resurrection (Anastasis) at Jerusalem, was also consecrated to Saint Anastasia, put to death under Diocletian at Sirmium in Illyria (now Mitrowitz in Serbia). Tradition seems to say that this "title" mentioned in a synod in 499 recalls the house of this holy Martyr in Rome. It is more than likely, however, that it concerns but a simply identity of name between the Roman foundress of this basilica and the titular saint.

Lent is the time when "God is near to us and eager to forgive us if we put aside our evil thoughts and forsake the way of sin" (Epistle). To do so we must cast sin out from our hearts, as Jesus cast out the sellers from the Temple (Gospel), and receive the teaching of Christ with the simplicity of children of God. Then He will be able to cure our souls as He healed the lame and the blind who came nigh unto Him.

Casting out the vainglorious wisdom of the world, let us profit by the holy Season of Lent, so that, "chastening our bodies by mortification, our souls may be filled with holy desires" (Collect).

Domine, refugium factus es nobis a generatione et progenie: a saeculo, et in saeculum tu es. * Priusquam montes fierent, aut formaretur terra, et orbis: a saeculo et usque in saeculum, tu es Deus.
Lord, Thou hast been our refuge from generation to generation: from eternity and to eternity Thou art. * Before the mountains were made, or the earth and the world was formed; from eternity Thou art God.
(Psalm 89:1-2 from the Introit)

Respice, Domine, familiam tuam, et praesta: ut apud te mens nostra tuo desiderio fulgeat, quae se carnis maceratione castigat.
Look down upon Thy household, O Lord, and grant that our souls, chastened by the mortification of the flesh, may glow in Thy sight with the desire for Thee.
(Collect)

The Church of St Anastasia: http://romanchurches.wikia.com/wiki/Sant'Anastasia
Posted by davidforster at 00:30