The Finding of the body of St Stephen, the First Martyr 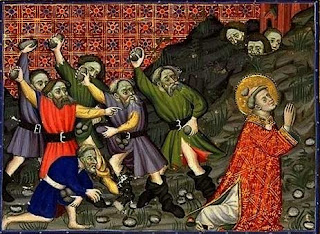 The Church solemnizes on December 26 the feast of St. Stephen, and on January 2 the octave of this saint. She holds the Station on Passion Friday in the Church dedicated to St. Stephen, on Mount Coelius, at Rome. On August 10 she will celebrate the feast of St. Laurence whose "remains more precious," say the writers of the first centuries, "than gold and precious stones "are with those of the deacon Stephen, which had been translated from Palestine to the capital of the Christian world.

To-day's Mass commemorates the miraculous finding by a priest of these relics at Kapher-Gamala on December 5, A.D. 415 (Collect). Except the Collect it is the same as that on December 26, the date of the translation of these remains from Kapher-Gamala to Jerusalem. For Gamaliel, the teacher of St. Paul, so much esteemed among the doctors of Israel that at his death it was declared that "the glory of Israel had disappeared", had buried twenty miles from that town, at his country house, the holy Martyr Stephen, Nicodemus and his own son Abibas. He himself was buried there. These precious relics, long ignored, were miraculously discovered and wrought numerous cures.

The Introit and the Epistle recall how Stephen, filled with the Holy Ghost, convicted the Jews of error, and how they, hating Christ as their fathers hated him (Gospel), seized Stephen and stoned him to death.

Let us honour St. Stephen, and imitating his prayers for his persecutors (Epistle, Communion), let us learn by his example to love our enemies (Collect).

Sederunt principes, et adversum me loquebantur: et iniqui persecuti sunt me: adjuva me, Domine Deus meus, quia servus tuus exercebatur in tuis justificationibus. * Beati immaculati in via, qui ambulant in lege Domini.
Princes sat, and spoke against me : and the wicked persecuted me: help me, O Lord my God, for Thy servant was employed in Thy justifications.* Blessed are the undefiled in the way, who walk in the law of the Lord.  (Psalm 118:23,86, 23, 1 from the Introit of Mass)

Da nobis, quaesumus, Domine, imitari quod colimus: ut discamus et inimicos diligere; quia ejus inventionem celebramus, qui novit etiam pro persecutoribus exorare Dominum nostrum Jesum Christum Filium tuum.
Grant us, we beseech Thee, O Lord, to imitate what we revere, that we may learn to love even our enemies: for we celebrate the day of the finding of his body, who could even plead on behalf of his persecutors with Thy Son our Lord Jesus Christ.
(Collect)

Catholic Encyclopaedia on St Stephen: http://www.newadvent.org/cathen/14286b.htm
Posted by davidforster at 00:30