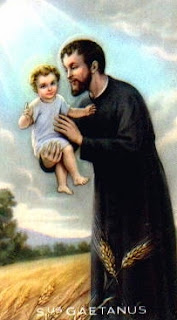 St. Cajetan founded the first Congregation of Clerks Regular who endeavour to imitate the manner of life of the apostles (Collect). Trust in God, which the Gospel recalls, was their great law; they therefore refrained from begging alms and waited until the faithful brought them help of their own accord. They are also called Theatines.

This saint's zeal for others' salvation caused him to be called the Hunter of Souls. It was said that he was an angel at the altar and an apostle in the pulpit. He died at Naples on August 7, 1547.


Os justi meditabitur sapientiam, et lingua ejus loquetur judicium; lex Dei ejus in corde ipsius. * Noli aemulari in malignantibus: neque zelaveris facientes iniquitatem.
The mouth of the just shall meditate wisdom, and his tongue shall speak judgement: the law of his God is in his heart. * Be not emulous of evildoers: nor envy them that work iniquity.
(Psalm 36:30-31,1 from the Introit of Mass)