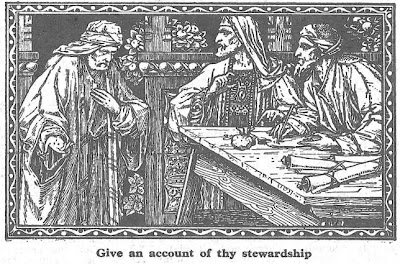 At Pentecost the Church received the outpouring of the Holy Ghost and to-day's liturgy shows us its happy results. This blessed Spirit makes us children of God since we are led by Him to say in simple truth: Our Father. Therefore we are assured of our heavenly inheritance (Epistle). But to obtain this assurance we must live for God, in living by Him (Collect), letting ourselves be led in all things by the Spirit of God (Epistle), so shall we one day be welcomed by God into everlasting dwellings (Gospel).

In this lies the true wisdom we learn from the story of Solomon, the reading of which is continued in the Breviary during this week, where an account is given of the great work to which this great king devoted his whole life.

Solomon built the temple of the Lord in the city of Jerusalem in obedience to the wish of his father David, who could not build it himself because of the unceasing wars waged against him by his enemies. Solomon took three years to prepare the material, namely, the stones which eighty thousand men dug out of the quarries of Jerusalem and wood from the cedars and cypresses, felled by thirty thousand men on Mount Libanus in the kingdom of Hiram. When all preparations had been made, the actual building was begun in the four hundred and eightieth year after the flight from Egypt, and lasted seven years. Hewn stone, woodwork and panelling had been so exactly measured beforehand that the work took place in the greatest possible silence. In God's house was heard neither axe nor hammer nor any iron tool while the building was going on.

For the plans of his temple, Solomon took Moses' tabernacle; giving it much larger proportions and accumulating it in all the riches that he could. The floors and ceilings made of precious wood were set off with plates of gold and the altars and tables were all gilded, while the candelabra and sacred vessels were of solid gold. Gilt palms and cherubim adorned all the temple walls.

When the work was finished, Solomon dedicated the temple to the Lord with great solemnity. In the presence of all the elders of Israel and of an immense crowd of people, representing the twelve tribes, the priests brought in the Ark of the Covenant, containing Moses' Tables of the Law, to its place under the spread wings of two gilt cherubim, ten cubits high, which stood in the Holy of Holies. Thousands of sheep and oxen were sacrificed, and as the priests left the Holy of Holies a cloud filled the House of the Lord.

Then Solomon, raising his eyes to heaven, besought almighty God to hear the supplications of all those, Israelite or stranger, who should come in the varying circumstances of their lives, to pray to Him in this place, consecrated to His Name. Moreover, he asked that God would hear those who, with face turned towards Jerusalem and the temple, should address their petitions to Him, to show clearly that He had chosen this house for His abode and that nowhere else was there a God like that of Israel.

The celebration of the Dedication of the temple lasted fourteen days, accompanied by sacrifices and sacred feasts, after which the people returned home, blessing the king and with grateful hearts for all the good that the Lord had done to Israel since the days of the Covenant on Sinai. And the Lord, appearing to Solomon a second time, said in effect: "I have heard thy prayer ... I choose and sanctify this house which thou hast built, my eyes and my heart shall be there always to watch over my faithful people."

In to-day's Mass, the Church sings some verses of six different psalms in which are summed up all the thoughts expressed in Solomon's prayer. "Great is the Lord and exceedingly to be praised, in the city of God, in his holy mountain" (Introit and Alleluia). "Who is God, but Thee, O Lord?" (Offertory). It is "in the midst of his" temple, that the outpouring of God's mercy is received (Introit), and that one may "taste and see that the Lord is sweet" (Communion), for He is "a God-protector and a place of refuge", for all who hope in Him (Gradual).

In the same way that Solomon's reign was a rough copy and image of that of Christ (2nd Nocturn), so the temple which he built at Jerusalem was but a figure of heaven, where God dwells and where He hears the prayers of men. It is to the holy mountain and the city of God (Alleluia) that we shall go one day to praise Him forever, for the Epistle tells us that if we live by the Spirit, mortifying the deeds of the flesh within us, we are the children of God, and therefore, as heirs of God and joint heirs with Christ we shall enter heaven, the place of our inheritance.

The Gospel completes this thought when it tells us, in the form of a parable, how we can use the "mammon of iniquity" to make sure of our entry into everlasting dwellings. An unjust steward, charged with having wasted his master's goods, makes friends for himself with the help of the goods the latter had entrusted to his care, that after his disgrace there might be those who would receive him into their houses.

Thus, teaches our Lord, should the children of light rival the energy of the children of the world, and copying the foresight of this functionary, make use of the goods placed at their disposal by almighty God to help the needy, thus making for themselves friends in heaven. For those who have borne their privations on earth in a Christian spirit will pass to the world above and will there bear witness to their benefactors at the time when all will have to give account of their stewardship to the divine Judge.

Suscepimus, Deus, misericordiam tuam in medio templi tui: secundum nomen tuum, Deus, ita et laus tua in fines terrae: justitia plena est dextera tua. * Magnus Dominus, et laudabilis nimis: in civitate Dei nostri, in monte sancto ejus.
We have received Thy mercy, O God, in the midst of Thy temple; according to Thy name, O God, so also is Thy praise unto the ends of the earth : Thy right hand is full of justice. * Great is the Lord, and exceedingly to be praised, in the city of God, in his holy mountain.
(Psalm 47:10-11,2 from the introit of Mass)

Largire nobis, quaesumus, Domine, semper spiritum cogitandi quae recta sunt, propitius et agendi: ut, qui sine te esse non possumus, secundum te vivere valeamus.
Grant to us, O Lord, we beseech Thee, the spirit to think and do always such things as are right; that we who cannot exist without Thee, may be able to live according to Thy will.
(Collect)

Continuation of the holy Gospel according to St. Luke.
At that time, Jesus spoke to His disciples this parable: There was a certain rich man who had a steward; and the same was accused unto him that he had wasted his goods; and he called him, and said to him: How is it that I hear this of thee? give an account of thy stewardship, for now thou canst be steward no longer. And the steward said within himself: What shall I do, because my lord taketh away from me the stewardship? To dig I am not able: to beg I am ashamed. I know what I will do, that when I shall be put out of the stewardship, they may receive me into their houses. Therefore calling together every one of his lord's debtors, he said to the first: How much dost thou owe my lord? But he said: A hundred barrels of oil. And he said to him: Take thy bill, and sit down quickly, and write fifty. Then he said to another: And how much dost thou owe? Who said: A hundred quarters of wheat. He said to him: Take thy bill, and write eighty. And the lord commended the unjust steward, for as much as he had done wisely: for the children of this world are wiser in their generation than the children of light. And I say to you: Make unto you friends of the mammon of iniquity, that when you shall fail, they may receive you into everlasting dwellings.
(St Luke 16:1-9)
Posted by davidforster at 00:30