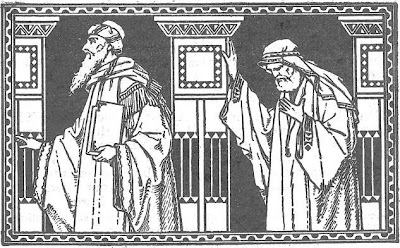 The liturgy for this Sunday seeks to impress upon us the true notion of Christian humility, which consists in attributing to the grace of the Holy Ghost whatever sanctity we may have attained; for our acts can only be of a supernatural character, if they are inspired by the Holy Ghost whom our Lord sent down upon His apostles on the day of Pentecost and whom He never ceases to give to those who ask.

Our salvation is an impossible task if we try to accomplish it alone, for left to ourselves, we are but weak and sinful. It is almighty God to whom we are indebted when we avoid sin, gain pardon, forsake wrongdoing and do good, for none can even utter our Lord's name by an act of supernatural faith, affirming His divinity and kingship, except by the Holy Ghost (Epistle).

Therefore pride is God's enemy, since it claims for itself the gifts which the Holy Ghost alone distributes to such as He will, and so by making us think that we are sufficient in ourselves, it hinders the manifestation of the divine power in our souls. How can God forgive us (Collect), if we will not confess our guilt? How can He have compassion on us, and show us His mercy (Collect) if we have within us no acknowledged wretchedness upon which His divine heart can have pity?

On the contrary, the humble man is glad to acknowledge his nothingness, knowing that on this condition alone will the power of Christ come into his heart.

The Church develops these thoughts to-day because the Breviary lessons for this week supply two examples, one of pride, the other of great humility. After the figure of Elias, contrasting so strongly with Achab and Jezebel, of whose terrible punishment we read in the divine office, that of the young Joas stands out in powerful opposition to Athalia. The daughter of Achab and Jezebel, quite as wicked as her mother, Athalia had married Joram the king of Juda, and as he died shortly after, the queen found herself mistress of the kingdom of Juda, and to secure her position had almost the whole family of David massacred. However Josaba, the wife of the high priest Joiada, took Joas, the youngest of the royal family, from his cradle, and hid him in the temple.

For six years Athalia ruled the country and set up altars of Baal right in the very temple courts. In the seventh year the high priest, surrounded by determined men, showed them Joas, then seven years old, and told them to form a bodyguard round the royal child, and to kill anyone who attempted to break through their ranks. Then when the people crowded into the temple court at the hour of the prayer, Joiada brought forward Joas and anointed and crowned him in sight of the whole multitude, amidst applause and cries of "Long live the King."

Athalia, hearing all this outcry, left her palace and went into the court. Seeing the young king seated on the tribunal surrounded by the chief men of the nation, amidst the shouts of the people, accompanied by the sound of trumpets, she rent her clothes and cried: "Treason and plot!" At the high priest's command she was put out of the sacred precincts, and brought to the threshold of her palace, where she was killed. Then the crowd rushed into the temple of Baal where they did not leave one stone upon another.

Meanwhile the king, Joas, sat on the throne of David, his grandfather, and reigned forty years in Jerusalem, where he worked at repairing and beautifying the temple (Alleluia, Communion). Holy Scripture gives him this excellent praise: "Joas did that which was right before the Lord." These words form the Magnificat Antiphon for the first Vespers of this Sunday, echoed by that of the second Vespers, taken from to-day's Gospel: "This man went down into his house justified rather than the other, because every one that exalteth himself shall be humbled and he that humbleth himself shall be exalted." "Those who exalt themselves," says St. Augustine, "are known by God from afar. From far off He looks upon the proud but forgives them not." On the other hand, the humble, like the publican, confess themselves guilty. " He struck his breast, he chastised himself, therefore God forgave the man who acknowledged his wretchedness. For why is it surprising that God no longer sees him as a sinner, when he himself acknowledges that he is one? He stands afar off, this publican, but God sees him from close at hand" (Matins)

In the same way the lowly-minded boy, Joas, was accepted of God, because his attitude before Him was what it should be. "He did that which was right before the Lord." On the contrary, Athalia was proud and wicked. She did not do what was right before the Lord, and she despised and insulted those who did their duty, for pride towards God always shows itself by contempt towards our neighbour. Pascal says that there are two kinds of men, saints who think themselves guilty of every fault and sinners who believe themselves guilty of none. The first are humble and God will exalt them with glory; the second are full of pride, and He will humble them by chastisement.

"God," says St. Chrysostom, "drowned the world, caused Sodom to be burned by fire, and the sea to swallow up the army of the Egyptians for it is He who has stricken the guilty with all the blows which have fallen upon them, and will do so still more. But, you say, God is merciful. Then are all these things merely words? Does the rich man who despised Lazarus receive no punishment? Are the foolish virgins in no way rejected by the bridegroom? Will not he who was at the wedding feast with soiled garments in no wise perish, bound hand and foot? Will not he who exacted the last farthing from his companion be delivered to the tormentors? Do you think that God will confine Himself to threats? To me it seems easy to prove the contrary and we may judge beforehand what God will do in the future, from what He has said and done in the past. Let us then have constantly in mind the dread tribunal, chains fastened for fall eternity, outer darkness, gnashing of teeth and the gnawing and poisonous worm" (2nd Nocturn).

This will be the best way to foster in ourselves that humility which makes say with the Church: "When I cried to the Lord He heard my voice, from them that draw near to me; and He humbled them, who is before all ages and remains forever" (Introit). "Keep me, O Lord, as the apple of Thy eye: let Thy eyes behold the things which are equitable" (Gradual.) "To Thee, O Lord, have I lifted up my soul: neither let my enemies laugh at me: for none of them that wait on Thee shall be confounded" (Offertory).

Cum clamarem ad Dominum, exaudivit vocem meam, ab his, qui appropinquant mihi: et humiliavit eos qui est ante saecula, et manet in aeternum: jacta cogitatum tuum in Domino, et ipse te enutriet. * Exaudi, Deus, orationem meam, et ne despexeris deprecationem meam: intende mihi, et exaudi me.
When I cried to the Lord He heard my voice, from them that draw near to me; and He humbled them, who is before all ages, and remains for ever: cast thy care upon the Lord, and He shall sustain thee. * Hear, O God, my prayer, and despise not my supplication; be attentive to me and hear me.
(Psalm 54:17,18,20,23,2 from the Introit of Mass)

Continuation of the holy Gospel according to St. Luke.
At that time, Jesus spoke this parable to some who trusted in themselves as just, and despised others. Two men went up into the temple to pray; the one a Pharisee, and the other a Publican. The Pharisee standing, prayed thus with himself: O God, I give Thee thanks that I am not as the rest of men, extortioners, unjust, adulterers; as also is this publican. I fast twice in the week; I give tithes of all that I possess. And the Publican standing afar off would not so much as lift up his eyes towards heaven, but struck his breast saying: O God, be merciful to me a sinner. I say to you, this man went down to his house justified rather than the other: because every one that exalteth himself shall be humbled, and he that humbleth himself shall be exalted.
(St Luke 18:9-14)
Posted by davidforster at 00:30