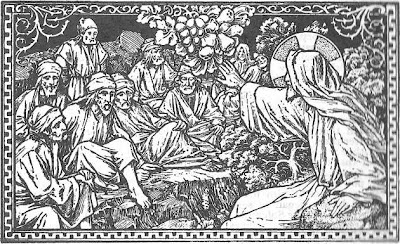 In words addressed to the Holy Ghost, "sevenfold" in grace, the Church prays in the Sequence for Pentecost:
"Grant to Thy faithful, dearest Lord,
Whose only hope is in Thy Word
Thy sevenfold gift of grace."

The first of these gifts is the fear of God which is the foundation of all the others (Gradual); the seventh is the gift of wisdom, an enlightenment from the Holy Ghost, thanks to which our intelligence is able to contemplate the truths of faith, set in a glorious light and in doing so to find great joy.

The sacred number seven which is borne by this Sunday (the seventh after Pentecost), suggests that it is this gift of wisdom that is the object of to-day's liturgy, and that with the Church itself, we ought to ask it from the Holy Ghost.

No better subject could have been chosen for the Breviary lessons for this week than the story of David's last days, for as St. Jerome says, "all bodily force weakens in old men, while only wisdom increases in them" (2nd Nocturn); and the story of his son Solomon, famous for his wisdom beyond all other kings. When David saw that his death was not far off, from among his sons he named Solomon, "the Lord's well-beloved" as his successor. Then the prophet Nathan took Solomon to Gihon. "And Sadoc the priest took a horn of oil out of the tabernacle and anointed Solomon. And they sounded the trumpet and all the people said: "God save King Solomon."


David, in a last charge to his son, reminding him that it was for him to build the temple of the Lord, said: "Take thou courage and show thyself a man. And keep the charge of the Lord thy God to walk in His ways, that the Lord may confirm His words which He hath spoken of me, saying: "Thy name is strengthened and thy posterity will reign forever. Do, therefore, according to thy wisdom, for thou art a wise man."

And David slept with his fathers and was buried in the city which bears his name, after reigning seven years in Hebron and twenty-three in Jerusalem, a strong fortress which he had taken from the Philistines.

"And Solomon sat upon the throne of his father David and his kingdom was strengthened exceedingly." He was only a young man of seventeen; he loved the Lord and sacrificed to Him. On one occasion at Gabaon after he had offered a sacrifice similar to that mentioned by Daniel in to-day's Offertory, and also alluded to in the Secret, "The Lord appeared to Solomon" saying: "Ask what thou wilt that I should give thee". And Solomon said: "O Lord God, thou hast made thy servant king instead of David my father. And I am but a child. Give, therefore, to thy servant an understanding heart, to judge Thy people and discern between good and evil." And the Lord said to Solomon: "Because thou hast asked this thing, and hast not asked for thyself long life or riches, nor the lives of thy enemies, but hast asked for thyself wisdom to discern judgement, behold, I have given thee a wise and understanding heart; insomuch that there hath been no one like thee before thee, nor shall arise after thee. Yea, and the things also which thou didst not ask, I have given thee: to wit riches and glory, so that no one hath been like thee among the kings in all days here before."

As God had promised, Solomon became not only the wisest, but the most powerful and magnificent of the kings of Israel. All the other sovereigns brought him presents and every nation who, until then, had despised Israel, began to seek an alliance with it. The Queen of Saba, who came to censure Solomon, was full of admiration at all that she saw and heard (Gradual). The Egyptian Pharao of the time, gave him his daughter in marriage and Hiram, king of Tyre, made a treaty with him. In return for the corn, barley, wine and oil, which the countryside of Palestine yielded in abundance, Hiram sent Solomon the priceless timber of the forests of Libanus as well as workmen to help the Israelites build the Temple.

King Solomon taught his people the fear of the Lord, who, on His part protected him in all his undertakings, and, among other things, saved him when his eldest son endeavoured to supplant him in the kingdom (Communion). In this way the words were fulfilled which were spoken by Solomon himself and of which St Jerome reminds us in to-day's office: "Refuse not wisdom and she will keep thee. Take possession of wisdom, acquire prudence; lay hold of her and she will raise thee up; through her thou wilt receive honour and when thou hast embraced her she will heap favours upon thy head and put upon thee a crown of glory." On this St Jerome comments: "Truly he who meditates day and night on the law of the Lord becomes with years more teachable, more formed through experience, wiser through the passage of time and in his old age he gathers the sweetest fruits of his former labours" (2nd Nocturn).

What the fruits of wisdom are, St Paul points out in the Epistle: "What fruit had you therefore in those things, of which you are now ashamed? ... For the end of them is death. But now being become servants to God, you have your fruit unto sanctification, and the end life everlasting" (Epistle). In the Gospel, our Lord tells us: "By their fruits you shall know them ... Every good tree bringeth forth good fruit and the evil tree bringeth forth evil fruit." And He adds: "Not every one that saith to me Lord, Lord, shall enter into the kingdom of Heaven; he that doeth the will of my Father who is in Heaven."

In commenting on to-day's Introit, St. Augustine remarks: "Hand and tongue must agree together; let the one glorify God and the other act accordingly." True wisdom does not consist only in hearing God's words but in fulfilling them; not only in praying to Him, but in showing Him by our actions that we love Him. "The Gospel," says St. Hilary, "warns us, that pleasing words and kindly airs are to be appraised according to the fruit of a man's works, and that a man is to be judged, not only as he paints himself in words but as he shows himself in deeds, since often the sheep's clothing serves to hide the fierceness of the wolf. Therefore, it is by our mode of life that we must merit eternal happiness, desiring what is good, avoiding evil and obeying the heavenly precepts with our whole heart, so that through the fulfilment of such duties we may be acknowledged by God" (3rd Nocturn).

Solomon, the peaceful monarch is none other than a type of Christ. His reign, hailed by all peoples, heralds that of the Messias, who is the true King of peace; Solomon, the wisest of kings foreshadows the Son of God whose heavenly Father said on Mount Tabor: "Hear ye Him" (Gradual). He is a type of that Incarnate wisdom who will teach us the fear of the Lord (Gradual), and the way to distinguish good from evil (Gospel). The holocausts offered at the dedication of Solomon's temple (Offertory) are like that of Abel, types of that unique and bloody sacrifice which Christ offered on Calvary and which He consummated in heaven where He entered after having obtained the victory over all His enemies.

This is the burden of the forty-sixth Psalm (Introit) in which the Fathers have seen under the symbol of the Ark of the Covenant, brought back by the people amid shouts of triumph from the field of battle to Mount Sion, a figure of the triumphant Ascension of our Lord into the heavenly kingdom.

Omnes gentes, plaudite manibus: jubilate Deo in voce exsultationis. * Quoniam Dominus excelsus, terribilis: Rex magnus super omnem terram.
Clap your hands, all ye nations: shout unto God with the voice of joy. * For the Lord is most high, He is terrible ; He is a great King over all the earth.
(Psalm 46:2-3 from the introit of Mass)

Deus, cujus providentia in sui dispositione non fallitur: te supplices exoramus; ut noxia cuncta submoveas, et omnia nobis profutura concedas.
O God, whose providence in the ordering of all things never fails ; we humbly beseech Thee to put away from us all harmful things, and to give us those things which are profitable for us. Through our Lord.
(Collect)

Continuation of the holy Gospel according to St. Matthew.
At that time, Jesus said to His disciples: Beware of false prophets, who come to you in the clothing of sheep, but inwardly they are ravening wolves. By their fruits you shall know them. Do men gather grapes of thorns, or figs of thistles? Even so every good tree bringeth forth good fruit, and the evil tree bringeth forth evil fruit. A good tree cannot bring forth evil fruit, neither can an evil tree bring forth good fruit. Every tree that bringeth not forth good fruit shall be cut down, and shall be cast into the fire. Wherefore by their fruits you shall know them. Not every one that saith to Me: Lord, Lord, shall enter into the kingdom of heaven; but he that doeth the will of My Father who is in heaven, he shall enter into the kingdom of heaven.
(St Matthew 7:15-21)
Posted by davidforster at 00:30