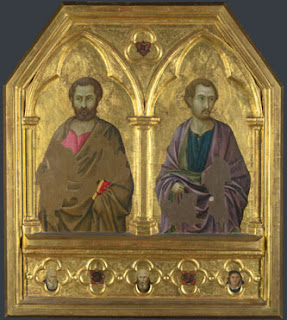 While Simon announced the Gospel to the peoples of the East, Jude wrote his catholic epistle which is still read in the West and "which", declares Origen, "contains strong doctrine in a few lines." In the first part he foretells the condemnation of heretics: he compares them to clouds without water, to autumn trees without fruit and to wandering stars for whom profound darkness is apportioned for all eternity. Like the rebel angels, they shall burn for ever in avenging flames. In the second part he exhorts the faithful not to be deceived by the seducers but to remain firm in their faith in God and Christ.

"My well-beloved, rising like an edifice on the foundation of your holy faith and praying by the Holy Ghost, keep yourselves in the love of God." The archangel St. Michael, St. Jude again declares, was established by the most High as guardian of the tomb of Moses. Having on this occasion to fight with Satan, probably to hinder him taking possession of the prophet's body, out of respect for his angelical dignity, he left to God, to condemn him Himself, saying: "May the Lord rebuke him." The Church puts these very words on the lips of the priests in the prayers of Leo XIII which are said after Low Mass at the foot of the altar.

Mihi autem nimis honorati sunt amici tui, Deus: nimis confortatus est principatus eorum. * Domine probasti me et cognovisti me: tu cognovisti sessionem meam et resurrectionem meam.
To me, Thy friends, O God, are made exceedingly honourable; their principality is exceedingly strengthened. * Lord, Thou hast proved me and known me: Thou hast known my sitting down and my rising up.

Deus, qui nos per beatos Apostolos tuos Simonem et Judam, ad agnitionem tui nominis venire tribuisti: da nobis eorum gloriam sempiternam et proficiendo celebrare, et celebrando proficere.O God, who through Thy blessed apostles Simon and Jude, hast brought us unto the knowledge of Thy name; grant that by advancing in virtue we may celebrate their everlasting glory, and by celebrating their glory we may advance in virtue.(Collect)
Catholic Encyclopaedia on 'The Brethren of the Lord': http://www.newadvent.org/cathen/02767a.htm
Posted by davidforster at 00:30