Christmas Day - Mass during the Day 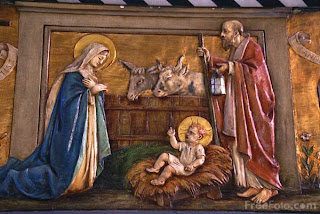 "In the beginning was the Word, and the Word was with God and the Word was God ... All things were made by Him" (Gospel). "Thou in the beginning, O Lord, didst found the earth, and the works of Thy hands are the heavens" (Epistle). "Thine are the Heavens and thine is the earth, the world and the fulness thereof Thou hast founded" (Offertory). Since man was made by Him, by Him also, will he be restored to his first dignity. Therefore "the Word was made Flesh and dwelt among us" (Gospel). "God ... last of all in these days (i.e., the age of the Messias), hath spoken to us by His Son who is the brightness of His glory" (Epistle). And the Church sings that "this day a great light hath descended upon the earth" (Alleluia). This Light shone in the darkness, but the darkness did not receive it, for "the Word came into the world but His own received Him not, but as many as received Him to them gave He power to become the Sons of God" (Gospel). In short, it was to free us from the bondage of sin, to cleanse us from our faults (Secret) and to cause us to be born anew to the divine life (Postcommunion) that the only-begotten Son of God was born, according to the flesh (Epistle).

More than seven hundred years before the birth of Christ, Isaias already extolled the power of this Infant-God. "A child is born to us ... whose government is upon His shoulder" (Introit); while His miracles are foreshadowed by almighty God in delivering the Hebrews from the Egyptian captivity (Versicle of Introit). Now, as then, "all the ends of the earth have seen the salvation that God has brought to His people" (Gradual and Communion).

The Redemption accomplished by Christ at His first coming will be completed by Him at the end of time. As St. Paul explains "(our Lord) making purgation of sins, sitteth on the right hand of the Majesty on High" (Epistle), so that His glorified humanity shares the throne of the Eternal God. "Thy throne, O God, is for ever and ever: a sceptre of justice is the sceptre of Thy Kingdom (Epistle). Justice and judgment are the preparation of Thy throne" (Offertory). "One day," St. Luke tells us, the Son of Man will come in His glory and that of His Father and His angels, to give to each one according to his works." When (at the end of the world) He bringeth His first-begotten into the world, He saith: "And let all the angels of God adore Him" (Epistle). Then will take place a transformation of all created things, since the Son of God, Himself unchanging, "shall change them as a vesture" (Epistle).

Again, the Apostle, quoting for the seventh time from the passage from which this epistle is taken, adds that almighty God will make of the enemies of Christ a "footstool" for His feet. This will be the final triumph of the Incarnate Word who, at His second coming will punish those who did not receive Him at His first coming on earth, while He will give a share in His immortality to those who, like the Magi, come to worship from afar, received Him with faith and love and so were made sons of God. Since also Christ is as really present in the Holy Eucharist as He was at Bethlehem, let us adore Him on the altar, that true manger where lies the Infant God; for at this Christmas tide the liturgy through the Missal, shows us the Sacred Host, in the setting of Bethlehem. Besides, it is in the great Church of our Lady which represents Bethlehem in Rome that the day-time Mass of Christmas as well as the midnight Mass is sung. 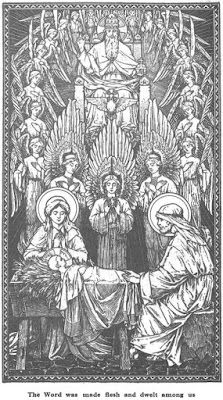 Puer natus est nobis, et filius datus est nobis: cujus imperium super humerum ejus: et vocabitur nomen ejus, magni consilii Angelus. * Cantate Domino canticum novum: quia mirabilia fecit.
A child is born to us, and a Son is given to us : whose government is upon His shoulder: and His name shall be called, the Angel of great counsel. * Sing ye to the Lord a new canticle: because He hath done wonderful things.
(Isaias 9:6 and Ps. 97:1 from the Introit)


The beginning of the holy  Gospel according to John.
In the beginning was the Word, and the Word was with God, and the Word was God. The same was in the beginning with God. All things were made by him, and without him was made nothing that was made. In him was life; and the life was the Light of men; and the Light shineth in the darkness, and the darkness did not comprehend it. There was a man sent from God, whose name was John. This man came for a witness, to give testimony of the Light, that all men might believe through him. He was not the Light, but was to give testimony of the Light. That was the true Light. which enlighteneth every man that cometh into this world. He was in the world, and the world was made by him; and the world knew him not. He came unto his own, and his own received him not. But as many as received him, to them he gave power to be made the sons of God: to them that believe in his name, who are born not of blood, nor of the will of the flesh, nor of the will of man, but of God. AND THE WORD WAS MADE FLESH, and dwelt among us: and we saw his glory, as it were the glory of the Only-Begotten of the Father, full of grace and truth.
(St John ch. 1) 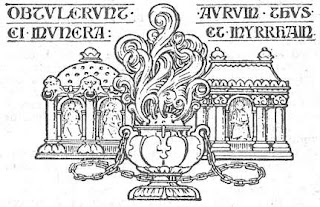