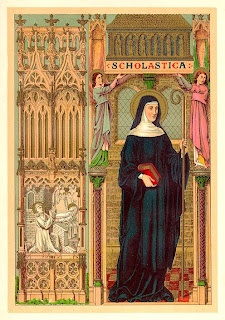 St. Scholastica, the twin sister of St. Benedict, was born at Nursia in Italy, in 480. It was a unique event in the annals of the Church, that brother and sister should have founded the two branches of an Order still full of vitality after an existence of fourteen centuries.

A scholar, as her name implies, of the Patriarch of the Monks of the West, from her earliest childhood she attended the school 'of his virtues, for she saw in him Christ' whose Spouse she was (Epistle).

The divine Spouse who was about to call her unto Him (Gospel), miraculously granted the prayer of his well-beloved. Benedict, a faithful observer of monastic discipline, had refused to continue the spiritual conversation which each year he granted his sister in a dependency of the abbey. Scholastica, leaning with her elbows on the table and holding her forehead in her hands, began to shed tears. lmmediately a violent storm burst forth and rain fell in torrents. Benedict understood that God sanctioned the brotherly love which had united them all their lives, and passed the whole night conversing with his sister about the joys of heaven. Three days later (543), while at prayer, before the night office, he saw the innocent soul of St. Scholastica ascend to heaven in the shape of a dove (Collect). Her body was placed at Monte-Cassino in the tomb her brother had prepared for himself, in which he was also placed a few weeks later. "Thus It happened," writes St. Gregory, "that one tomb united the bodies of those whose souls had always been intimately united in God."

Let us ask "God who received into heaven the soul of the blessed virgin Scholastica in the shape of a dove to show us the way of innocence, to grant us by her merits and prayers to live so innocently that we may deserve to attain eternal joys" (Collect). 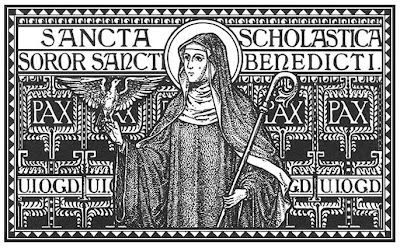 Deus, qui animam beatae Virginis tuae Scholasticae ad ostendendam innocentiae viam in columbae specie caelum penetrare fecisti: da nobis ejus meritis et precibus ita innocenter vivere, ut ad aeterna mereamur gaudia pervenire.
O God, who didst cause the soul of the blessed virgin Scholastica to enter heaven in the form of a dove, to show us the way of innocence, grant, by her prayers and merits, that we may live in such innocence, as to deserve to attain eternal joys.
(Collect)

O quam praeclara sunt merita beatae Scholasticae! O quanta virtus lacrimarum, per quas inclyta Virgo aeris serenitatem ad pluviae traxit inundationem.
O how excellent are the merits of blessed Scholastica! O what strength in those tears, through which the unsullied Virgin compelled the serenity of the sky to send an torrent of rain.
(Benedictus Antiphon, Monastic Breviary)
Posted by davidforster at 00:30