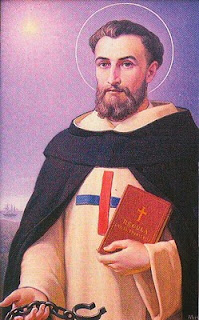 St. John of Matha was born in Provence and from his earliest childhood distinguished himself by his charity to the poor.
Ordained priest in Paris, he, at his first Mass, had a vision in which God commanded him to establish the Order of the Holy Trinity for the ransoming of captives (Collect). He therefore retired into solitude and during three years lived in prayer and contemplation with St. Felix of Valois (Introit). A second vision determined them to approach Innocent III, who gave his approbation to the new institution commanded by God.

Thanks to the abundant alms (Epistle) which St. John of Matha obtained from the kings and princes of France and Spain, he was enabled to ransom a large number of Christian fallen into the hands of infidels.

He passed his last two years in Rome in continual mortification and prayer and was thus the faithful servant who watched for the coming of his Master at every hour of his life (Gospel). He died in 1213.

Deus, qui per sanctum Joannem ordinem sanctissimae Trinitatis ad redimendum de potestate Saracenorum captivos caelitus instituere dignatus es: praesta, quaesumus; ut, ejus suffragantibus meritis, a captivitate corporis et animae, te adjuvante, liberemur.
O God, who didst vouchsafe to institute by heavenly direction, through St. John, the order of the Holy Trinity, for redeeming captives from the power of the Saracens, grant,  we beseech Thee, that by the suffrage of his merits, we may be delivered by Thy grace from captivity of soul and body.
(Collect)
Posted by davidforster at 00:30