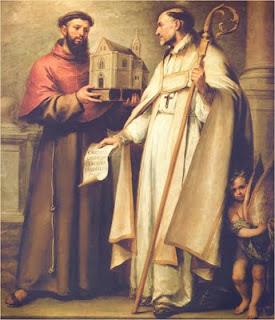 St. Bonaventure was born in Tuscany in 1221. He entered the Franciscan Order, in consequence of a miraculous cure due to the intercession of St. Francis of Assisi. His master was Alexander of Hales, who used to say of his virginal disciple that one would have thought him preserved from original sin.

He was a Doctor at thirty (Collect) and taught at the University of Paris at the same time as St. Thomas Aquinas, to whom he was closely united.

He was awarded the title of Seraphic Doctor.

Appointed General of his Order, and later a Cardinal of the Church (Communion, Alleluia), he died in 1274 during the general Council of Lyons where Greeks and Latins vied in admiring his zeal and clear-mindedness which made him the light of faith.

Deus, qui populo tuo aeternae salutis beátum Bonaventurum minístrum tribuísti: praesta, quaesumus; ut, quem Doctorem vitae habuimus in terris, intercessorem habere mereamur in coelis.
O God, who didst give unto Thy people blessed Bonaventure to be a minister of eternal salvation: grant, we beseech Thee, that we may be worthy to have as an intercessor in heaven him, whom we have had as teacher of life on earth.
(Collect)