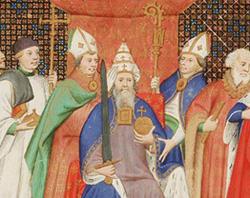 Henry II, surnamed the Pious, was king of Bavaria in 972, king of Germany in 1002, and head of the Holy Roman Empire from 1014 to 1024. He promised on oath to Benedict VIII, who had crowned him, "to be faithful in all things to him and his successors". He did his best to spread religion, restoring destroyed churches, and founding monasteries which he liberally endowed (Epistle). Detained at Monte Cassino by severe illness, he was miraculously cured through the intercession of St. Benedict.

In order to be ready for the coming of the Divine Master (Gospel, Communion), he returned from Italy through France, was admitted as a secular oblate at Cluny and asked to be received into the Benedictine abbey of St. Vanne at Verdun. The abbot welcomed him, but immediately commanded him, in the name of religious obedience, to re-ascend the imperial throne.

He so loved the law of God (Introit), that he preserved absolute virginity in marriage (Introit). Indeed, by agreement with his holy spouse Cunegund, he determined to make Jesus Christ their heir, and with this view he founded the bishopric of Bamberg, to which he left all his possessions. He was buried in its cathedral in 1024.

Deus, qui hodierna die beatum Henricum Confessorem tuum e terreni culmine imperii ad regnum aeternum transtulisti: te supplices exoramus; ut, sicut illum, gratiae tuae ubertate praeventum, illecebras saeculi superare fecisti, ita nos facias, ejus imitatione, mundi hujus blandimenta vitare, et ad te puris mentibus pervenire.
O God, who on this day didst remove blessed Henry, Thy  confessor, from the government of an earthly empire and raise him to the eternal kingdom; we humbly beseech Thee that, even as Thou didst prevent him with the fulness of grace and didst give him  strength to overcome the enticements of this life, so Thou wouldst enable us through his example, to shun the allurements of this world and come to Thee with pure hearts.
(Collect)