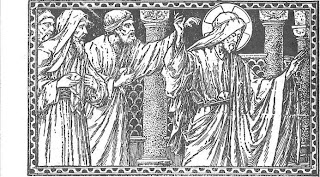 Station at St Peter's in the Vatican

"We are not unaware," says St. Leo, "that among all Christian celebrations the Paschal mystery holds the first place. Our manner of living throughout the whole year, by reforming our ways, ought to give us the dispositions for keeping it worthily and in a fitting manner. These present days which we know to be close to that most sublime sacrament of divine mercy, require devotion in a yet higher degree" (Second Nocturn). The mystery of which St. Leo speaks, is our Redeemer's Passion, whose anniversary is close at hand. Priest and Mediator of the New Testament, Jesus will soon ascend His Cross, and the blood which He will shed He will offer to His Father, entering into the Holies which is heaven itself (Epistle). The Church sings: "All hail, thou Mystery adored! Hail, Cross! on which the Life Himself died, and by death our life restored!" (Hymn of Vespers). The Eucharist is the memorial of this boundless love of a God for men for when instituting it our Lord said: "This is my Body which shall be delivered for you; this chalice is the new testament in My Blood. Do this ... in commemoration of Me" (Communion).

What is the response of man to all these divine favours ? "His own received Him not," says St. John, speaking of the welcome which the Jews gave Jesus. For good they rendered Him evil and prepared for Him nothing but insults. "You," our Lord told them, "dishonour me," and in fact, the Gospel shows us the ever growing hatred of the Sanhedrin.

Abraham, the father of God's people, firmly believed the divine promises which heralded the future Messias; and in Limbo his soul, which, as believing was beyond the reach of eternal death, rejoiced to see these promises fulfilled in the coming of Christ.

But the Jews, who ought to have recognized in Jesus the Son of God, greater than Abraham and the prophets, because eternal, misunderstood the meaning of His words, insulted Him by treating Him as a blasphemer and possessed, and tried to stone Him (Gospel). And God tells Him, in the person of Jeremias: "Be not afraid at their presence: for I am with thee to deliver thee, saith the Lord ... For behold I have made thee this day a fortified city and a pillar of iron and a wall of brass, over all the land, to the kings of Juda, to the princes thereof and to the priests and to the people of the land. And they shall fight against thee and shall riot prevail: for I am with thee, saith the Lord, to deliver thee" (First Nocturn). "I seek not my own glory," says Jesus, "there is one that seeketh and judgeth" (Gospel). And by the mouth of the psalmist He goes on: "Judge me, O God, and plead my cause against an ungodly nation: O deliver me from the unjust and deceitful man. " This "lying" people our Lord declares to be the Jews. The psalmist continues: "Deliver me, O Lord, from my enemies ... from the unjust man Thou wilt deliver me" (Gradual). "The Lord who is just will cut the necks of sinners" (Tract). God will not permit men to lay their hands on Jesus until His hour is come (Gospel), and when that hour of sacrifice came, He snatched His Son from the hands of evil men by raising Him from the death. This death and resurrection had been foretold by the prophets and typified in Isaac when, on the point of being sacrified at God's command by Abraham his father he was restored to life by almighty God, his place being taken by a ram who became a type of the Lamb of God, offered in man's stead.

Thus our Lord, in His first coming, was to be humbled and made to suffer; not until later will He appear in all His power. But the Jews, blinded by their passions, could appreciate only one kind of coming, a coming in triumph, and so scandalized by the Cross of Christ, they rejected Him. In their turn, almighty God rejected them, while graciously receiving those who put their trust in the redemption of Jesus Christ, uniting their sufferings to His. "Rightly, and under the guidance of the Holy Ghost," says St. Leo, "did the holy Apostles institute these days of more rigorous fasting, so that by a common sharing in the Cross of Christ, even we ourselves may do something towards uniting ourselves with the work that He has accomplished for us. As St. Paul says: "If we suffer with Him, we also shall be glorified with Him." Where we find our Lord's sufferings being shared, there we can look on the attainment of the happiness promised by Him as a thing safe and assured."

To-day's station is in the Basilica of Saint-Peter, raised on the site of Nero's circus where the prince of the Apostles died, like His Divine Master on a cross.

In recalling our Lord's Passion, the anniversary of which draws near, let us remember that if we are to experience its saving effects we must, like the Master, know how to suffer persecution for justice sake. And when as members of God's family, we are persecuted with and like our Lord, let us ask of God, that we may be "governed in body" and "kept in mind".

Until Maunday Thursday, in masses of the season, the psalm Judica is omitted as well as the Gloria Patri after the Introit and the Lavabo.

Judica me, Deus, et discerne causam meam de gente non sancta: ab homine iniquo et doloso eripe me: quia tu es Deus meus et fortitudo mea. * Emitte lucem tuam, et veritatem tuam: ipsa me deduxerunt, et adduxerunt in montem sanctum tuum, et in tabernacula tua.
Judge me, O God, and distinguish my cause against an ungodly nation: O deliver me from the unjust and deceitful man: for Thou art my God and my strength. * O send out Thy light and Thy truth : they have led me and brought me unto Thy holy hill, even unto Thy tabernacles.
(Psalm 42:1-3 from the Introit of Mass)

Quaesumus, omnipotens Deus, familiam tuam propitius respice: ut, te largente, regatur in corpore, et te servante, custodiatur in mente.
Mercifully look down on thy people, we beseech thee O almighty God, that by thy bounty and protection, they may be governed and guarded both in body and soul.
(Collect)

Lesson of the Epistle of Saint Paul the Apostle to the Hebrews.
Brethren: Christ being come, an High Priest of the good things to come, by a greater and more perfect tabernacle not made with hands, that is, not of this creation, neither by the blood of goats or of calves, but by his own Blood, entered once into the Holies, having obtained eternal redemption. For, if the blood of goats and of oxen, and the ashes of an heifer being sprinkled, sanctify such as are defiled, to the cleansing of the flesh: how much more shall the Blood of Christ (who by the Holy Ghost offered himself unspotted unto God), cleanse our conscience from dead works to serve the living God: And therefore, he is the mediator of the new Testament: that by means of his death, for the redemption of those transgressions which were under the former Testament, they that are called may receive the promise of eternal inheritance, in Christ Jesus our Lord.
(Hebrews 9)

Continuation of the holy Gospel, according to John.
At that time: Jesus said to the multitude of the Jews: Which of you shall convince me of sin? If I say the truth to you, why do you not believe me? He that is of God, heareth the words of God. Therefore you hear them not, because you are not of God. The Jews, therefore, answered and said to him; Do not we say well that thou art a Samaritan, and hast a devil? Jesus answered: I have not a devil; but I honour my Father, and you have dishonoured me. But I seek not my own Glory: there is one that seeketh and judgeth. Amen, amen, I say to you: If any man keep my word, he shall not see death for ever. The Jews therefore said: Now we know that thou hast a devil. Abraham is dead, and the prophets: and thou sayest: If my man keep my word, he shall not taste death for ever. Art thou greater than our father Abraham, who is dead? And the prophets are dead. Who dost thou make thyself? Jesus answered: If I glorify myself my glory is nothing. It is my Father that glorifieth me, of whom you say that he is your God; and you have not known him, but I know him. And if I shall say that I know him not, I shall be like to you, a liar. But I do know him, and do keep his word. Abraham your father rejoiced that he might see my day: he saw it, and was glad. The Jews therefore said to him: Thou art not yet fifty years old, and hast thou seen Abraham? Jesus said to them: Amen, amen, I say to you, before Abraham was made, I am. They took up stones therefore to cast at him. But Jesus hid himself, and went out of the temple.
(St John chapter 8)

Dom Gueranger on Passion Sunday: http://www.liturgialatina.org/lityear/passion/passion_sun.htm
Posted by davidforster at 00:30