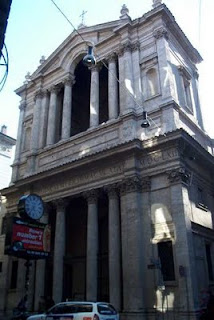 The Church to day unites the memory of a Martyr with that of the Passion of Jesus in making the Station in the church of the holy deacon Cyriacus martyred under Diocletian at the gates of Rome. This church, one of the twenty-five parish churches of Rome in the fifth century, having been destroyed, the body of the holy martyr was translated to beneath the High Altar of St. Mary in Via Lata, which became the place of assembly for this day.

The Epistle and Gospel tell us of the approaching Passion of the Messiah and of the rejection of Israel, who is replaced by the Gentiles in the Church.

"Daniel who has destroyed Bel and slain the Dragon " (Epistle) is Jesus who denounces the crimes and sins of the world (Gospel). The Babylonians sought to destroy the prophet by throwing him as food to the hungry lions. The Jews also "sought to kill Jesus" and for this dark design "their hour is always at hand".

But, like Daniel, full of fortitude, He awaits the Lord (Introit), and God, "who does not abandon those who love and seek Him " (Epistle, Offertory), "delivers Him from unjust men and from all the ills that threaten Him" (Gradual, Communion). "Those who had wished to destroy Daniel were themselves thrown to the lions and devoured instantly " (Epistle). In the same way the deicide nation suffered the penalty of its crime. Forty years later, a million Jews taken in Jerusalem were exterminated by the Roman legions, after five long months of famine.

Fearing the chastisements of divine Justice, let us persevere in the expiatory practice of fasting in order that we may be made worthy of the eternal reward accorded to the just (Collect). 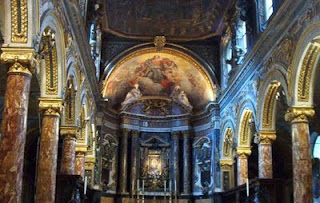 Exspecta Dominum, viriliter age: et confortetur cor tuum, et sustine Dominum. *. Dominus illuminatio mea, et salus mea: quem timebo?
Expect the Lord, do manfully: and let thy heart take courage, and wait thou for the Lord. * The Lord is my light and my salvation: whom shall I fear?
(Psalm 26:14,1 from the Introit of Mass)

Pictures of the Stational Churches: http://frcoulter.com/pics/station-churches/lent5/lent5.html#Tuesday
Posted by davidforster at 00:30