Saturday of the Fourth Week in Lent

Saturday of the Fourth Week in Lent 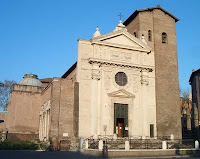 Station at St Nicholas's in Carcere

The Station is at a church built on the ruins of three pagan templca and consecrated to St. Nicholas. It is called in carcere because in former times it had a dungeon.

Here are venerated the remains of the holy Martyrs Mark, Marcellinus, Faustinus, Simplicius, and Beatrice, contained in an ancient urn placed under the high altar. The interior, in the form of a basilica, is very harmonious.

However, before the eighth century, the station was kept at St. Laurence "in Lucina": this is why so many allusions to "light" are made in this Mass. Water is also often mentioned: it reminds the catechumens the water of baptism for which they are longing; besides, it alludes also to the fact that the stational procession, coming from the church of Sant' Angelo "Piscium Venditor" (at Castel Sant'Angelo) had to walk along the Tiber.

Isaias, from whom the Introit and the Epistle of the Mass are taken, sees hastening from all sides the catechumens and public penitents who are waiting with holy impatience for the Easter Feast, when at last their souls may quench their thirst in the springs of grace through the sacraments of Baptism and Penance.

They were in darkness and Jesus gives them light (Epistle), for He tells us in the Gospel that He is the light of the world and that he who follows Him walketh not in darkness, but in the light of life. Let us also, by penance, cast out sin from our hearts, and let us ask Christ to fill them with the light of His grace. 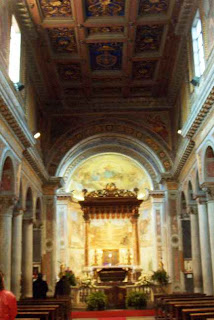 Fiat, Domine, quaesumus, per gratiam tuam fructuosus nostrae devotionis affectus: quia tunc nobis proderunt suscepta jejunia, si tuae sint placita pietati.
May the affection of our devotion be made fruitful by Thy grace, we beseech Thee, O Lord: for then will the fasts we have undertaken become profitable to us, if they are pleasing, to Thy mercy.
(Collect)
Posted by davidforster at 00:30