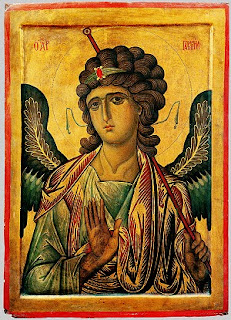 St. Gabriel was sent to Daniel to enlighten him as to the time when Christ would be born (Epistle), and to Zachary, at the hour in which he offered incense in the temple (Offertory), to announce to him the birth of John the Baptist, the Precursor of the Messias (Gospel). "Only Gabriel, a name that means 'Power of God,' was found worthy among all the angels," says St. Bernard, "to announce to Mary the designs of God with regard to her" (Matins). "He was chosen from among all the angels," says the Collect, "to proclaim the mystery of the Incarnation."

With a feeling of holy reverence, St. Gabriel came to the Virgin who from all eternity had been chosen to be the mother on earth of Him of whom God is the Father in heaven. In the words inspired by the most High, and which the Church desires us to repeat frequently, he said to her: Hail, full of grace, the Lord is with thee: blessed art thou among women."

And seeing that Mary was taken aback by this salutation, the angel explained that he had come to obtain her consent, her Fiat, that the great mystery on which depended the redemption of mankind might be accomplished. "I am Gabriel who stand before God, and I have been sent I to speak to thee and to tell thee these good tidings" (Matins).

Mary then, without hesitating, submitted with the most profound humility: Behold the handmaid of the Lord: be it done to me according to Thy word.

And in that instant was accomplished the greatest of all miracles, when God raised unto Himself and into union with Him the blessed fruit of the womb of the Virgin: "And the Word was made flesh and dwelt among us." The Word took upon Him our humanity, our poverty, our nothingness, and gave us in return His divinity.

The angel then returned to heaven.

"Having learned by the mouth of Gabriel the Incarnation of the Word, may it be given to us to obtain by his help the fruit of that same Incarnation" (Postcommunion).

Benedict XV extended the feast of St. Gabriel to the whole Church.

Benedicite Dominum, omnes Angeli ejus: potentes virtute qui facitis verbum ejus, ad audiendam vocem sermonum ejus. * Benedic, anima mea, Domino: et omnia, quae intra me sunt, nomini sancto ejus.
Bless the Lord, all ye His angels: you that are mighty  in strength, and execute His word, hearkening to the voice of His orders. * Bless the Lord, O my soul: and let all that is within me bless His  y. Gl6ria holy name. (Psalm 102:20,1 from the Introit of Mass)

Deus qui inter ceteros Angelos, ad annuntiandum Incarnationis tuae mysterium  Gabrielem Archangelum elegisti: concede propitius; ut qui festum ejus celebramus in terris, ipsfus patrocinium sentiamus in caelis.
O God, who didst choose from among all other angels the Archangel Gabriel to announce the mystery of Thine Incarnation, grant in Thy mercy that celebrating his feast on earth we may reap the effect of his protection in heaven.
(Collect)