Ferial Mass of the Friday in Passion Week 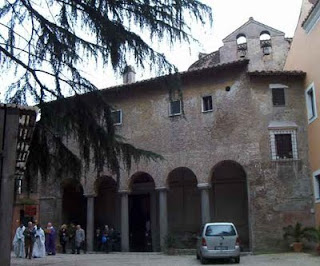 The Station was at the Church of St. Stephen on Mount Coelius, called St. Stephen the Round, on account of its circular form. It was dedicated in the fifth century to the first of the martyrs whose relics had just been brought to Rome.

This Saint was the first martyr or witness of Christ. Whilst dying, he beheld the Saviour at the right hand of the Father in heaven. Thus it was fitting to assemble in this basilica at this holy time, consecrated to the memory of the Saviour's Passion, which prepares us to celebrate His triumph at Easter.

The Gospel of to-day mentions the sitting of the Sanhedrim at which the death of Jesus was irrevocably decreed by the Jewish priests.

The miracle of the resurrection of Lazarus, they say, will excite during the Paschal festivities, when crowds fill Jerusalem, such popular enthusiasm that the Romans, uneasy for their authority, will destroy our city and nation. It is therefore better, concludes Caiphas, that one man should disappear and that the nation should be saved.

Jeremias in the Epistle and the Psalmist in the Introit, the Gradual, the Offertory and the Communion, express the sorrows and anguish of Jesus, who feels Himself surrounded by such treacherous and relentless enemies.

Let us participate in the feelings of Christ, who will soon atone for our sins by the sufferings of His Passion. And may the fear of eternal punishment make us accept the troubles of this life and the holy austerities of Lent (Collect). 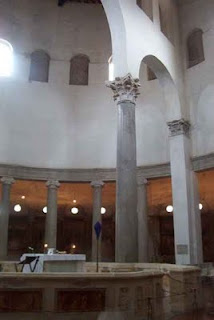 Miserere mihi, Domine, quoniam tribulor: libera me, et eripe me de manibus inimicorum meorum, et a persequentibus me, Domine, non confundar, quoniam invocavi te. * In te, Domine, speravi, non confundar in aeternum: in justitia tua libera me.
Have mercy on me, O Lord, for I am afflicted: deliver me out of the hands of my enemies, and from them that persecute me: O Lord, let me not be confounded, for I have called upon Thee. *. In Thee, O Lord, have I hoped, let me never be confounded: deliver me in Thy justice. Have mercy on me.
(Psalm 30:10,16,18,2 from the Introit of Mass)

Cordibus nostris, quaesumus, Domine, gratiam tuam benignus infunde: ut peccata nostra castigatione voluntaria cohibentes, temporaliter potius maceremur, quam supplices deputemur aeternis.
Pour forth Thy grace into our hearts, we beseech Thee, O Lord, that we who refrain from sin by self-denial, may be rather afflicted in time than condemned to eternal punishment.
(Collect)