Tuesday of the Third Week in Lent

Tuesday of the Third Week in Lent 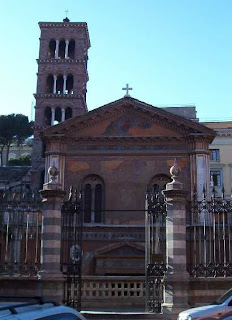 The Station is at the very ancient sanctuary of St. Pudentiana erected on the site of the house of her father, the senator Pudens, mentioned by St. Paul in his epistles. St. Pudentiana lived here with her sister St. Praxedes. Here St. Peter received hospitality and the first Christians often assembled. In the second century this house seems to have been the residence of the Roman Pontiffs. For such reasons it became one of the twenty-five parish churches of Rome in the fifth century. It was quite fitting to read there, the Gospel in which St. Peter asks our Lord about the use of the power of the keys.

The clemency of the Jews was content to forgive three times: Jesus in the Gospel says we are to forgive seventy times seven times, that is to say always. Mercy with the sacrifices which accompany it forms part of the Lenten penance. Wherefore the Epistle shows us in the miraculous increase of a small quantity of oil at the word of Eliseus, by the sale of which afoor widow was enabled to pay a pitiless creditor, a figure of the mercy of the Saviour, whose infinite ments supply the ransom for our sins. In order to participate in the effects of this charity of Christ, we should in our turn exercise the same virtue. Then will the Church, in the name of Jesus, make use in our favour of the power of remission which she holds from her Head.

Let us atone for our sins and forgive our neighbour his sins against us. And then let us implore the God of mercy to grant us by His almighty power the pardon for our sins (Postcommunion). 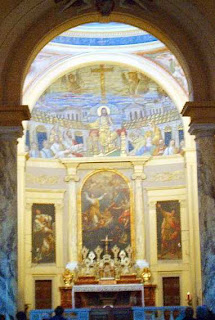 Ego clamavi, quoniam exaudisti me, Deus: inclina aurem tuam, et exaudi verba mea: custodi me, Domine, ut pupillam oculi : sub umbra alarum tuarum protege me. * Exaudi, Domine, justitiam meam: intende deprecationem meam.
I have cried to Thee, for Thou, O God, has heard me: O incline Thine ear unto me and hear my words: keep me, O Lord, as the apple of Thy eye: protect me under the shadow of Thy wings. * Hear, O Lord, my Justice: attend to my supplication.
(Psalm 16:6,8,1 from the Introit of Mass)