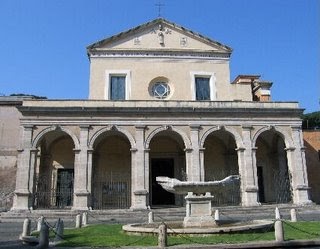 Station at St. Mary in Dominica, (on Monte Celio.)

The Station at Rome is in the church of St. Mary's in Dominica, because in former times the Christians gathered there on Sundays in the house of the Lord (Dominicum). It is said to have been here that Saint Laurence distributed the goods of the Church to the poor. It is one of the fifth century parishes of Rome.

Just as on Septuagesima, Sexagesima, and Quinquagesima Sundays, the subject matter of the divine Office forms the texture of the Masses for the Second, Third and Fourth Sundays of Lent in such a way, that past ages still carry on their work of illustrating the Paschal mystery and so preparing us for it. And indeed our Lord's ancestors, according to the flesh, are types of both Him and His Church.

To-day in the breviary we read of the Patriarch Jacob, model of the most complete trust in God in the midst of all adversities, who Holy Scriptures often call Jehovah the God of Jacob or Israel, when He is referred to as the protector of His people. In the Introit we say, "O God of Israel deliver us from all our tribulations". It is then, to the God of Jacob, the God of those who serve Him, that the Church addresses herself to-day. In the Introit we read that he who puts his trust in God will never be ashamed. In the Collect we ask almighty God to keep us both inwardly and outwardly, that we may be preserved from all adversities. In the Gradual and Tract we beseech our Lord that He will deliver us from our troubles and adversities and visit us with His salvation. The life of the patriarch Jacob could not be summed up in a better way: he whom God always helped in the midst of his trouble and in whom, as Saint Ambrose says, "we must acknowledge singular courage and great patience in labours and trials". (Fourth lesson of the third Sunday in Lent.)

Jacob was chosen by almighty God to be the heir of His promises, just as formerly He had selected Isaac Abraham, Sem and Noah. The name Jacob really means. Supplanter, and he fulfilled the meaning of his name when he bought Esau's first birthright from him for a mess of pottage, thee ... and be thou lord of thy brethren."

Further, when Jacob had to flee to escape Esau's vengeance, he saw in a dream a ladder reaching to heaven upon which the angels ascended and descended. At the head of the ladder was the Lord who told him: "In thee and thy seed all the nations of the earth shall be blessed. And I will be thy keeper whithersoever thou goest, and will bring thee back into this land; neither will I leave thee, till I shall have accomplished all that I have said." After twenty years Jacob returned to his own land; then an angel wrestled with him all night without over-powering him and in the morning told him: "Thy name shall not be called Jacob but Israel; for if thou hast been strong against God, how much more shall thou prevail against men?" Jacob gained his brother's confidence and they were reconciled.

Every feature of the history of this patriarch is typical of Christ and the Church in the Paschal mystery. Saint Augustine writes: "The blessing which Isaac gave Jacob, has a symbolic meaning in which the goatskins represent sins, while Jacob clothed in these skins is the figure of Him Who, having no sins of his own, bore those of others." In somewhat the same way a Bishop uses gloves at a pontifical Mass and says in effect, that Jesus was offered for us in the likeness of the flesh of sin. Saint Leo, in his exposition, says: "That for the restoration of Ihe human race, His unchangeable divinity stooped to take the form of a slave and that this is why our Lord promised in formal and precise terms, that some of His disciples should not "taste of death till they see the Son of Man coming in His Kingdom," that is; in the royal glory which belongs spiritually to His adopted human nature, a glory which the Lord willed to reveal to His three disciples; since "although they were aware of the divine majesty which lay hidden within Him, they were ignorant of the possibilities of the very Body which clothed the divinity."

Again, on the holy mountain, where our Lord was transfigured, a voice was heard saying: "This is my beloved Son in whom I am well-pleased. Hear ye Him." So God the Father blesses His Son clothed with our sinful flesh, as Isaac blessed Jacob, clothed with the goatskins, which blessing given to Christ is given also to the Gentiles in preference to the faithless Jews, just as Jacob was blessed in preference to his elder brother. When the Bishop puts on his pontifical gloves, he addresses the following prayer to almighty God. "Encompass my hands, O God, with the purity of the New Man come down from heaven, that as Jacob who had covered himself with goatskins obtained his father's blessing having offered him meats and good winll, so also may I, offering to Thee the victim of salvation at my hands, obtain the blessing of Thy grace. Through our Lord."

It is in Christ that we are blessed by the Father. He is our elder brother and our head: To Him must we listen for He has chosen us for His people, "We pray and beseech you in the Lord Jesus," says St, Paul, "that as you have received from us, how you ought to walk and to please God, so also you would walk, that you may abound the more. For you know what precepts I have given you by the Lord Jesus ... For God hath not called us unto uncleanness, but unto sanctification in Christ Jesus our Lord" (Epistle).

In St. John's Gospel (1:51), our Lord applies the vision of Jacob's ladder to Himself, to show that in the midst of the persecutions of which He was the object, He was constantly under the protection of almighty God and His angels. So St. Hippolytus says: "As Esau planned his brother's death, so the Jews plotted against Christ and the Church. Jacob must needs fly into a far country; in the same way Christ, thrust out by the unbelief of His own nation, had, to depart into Galilee where the Church, sprung from the race of Gentiles, is given to Him as His Spouse." Moreover; at the end of time, these two peoples will be reconciled as were Esau and Jacob.

To-day's Mass, then, taken in connection with the breviary lessons for this week, acquires its full sense and helps us to understand the true meaning for us of the Paschal mystery which we are about to celebrate. Jacob beheld the God of Glory; the apostles saw Jesus transfigured; soon the Church will show us the risen Saviour. 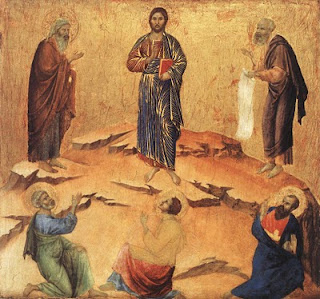 Reminiscere miserationum tuarum, Domine, et misericordiae tuae, quae a saeculo sunt: ne unquam dominentur nobis inimici nostri: libera nos, Deus Israel, ex omnibus angustiis nostris. * Ad te, Domine, levavi animam meam: Deus meus, in te confido, non erubescam.
Remember, O Lord, thy bowels of compassion, and thy mercies that are from the beginning of the world. Let not our enemies ever rule over us: deliver us, O God of Israel, from all our distress. * To thee, O Lord, have I lifted up my soul; in thee, O my God, I put my trust, let me not be ashamed.
(Introit of Mass)

Deus qui conspicis omni nos virtute destitui, interius exteriusque custodi: ut ab omnibus adversitatibus muniamur in corpore, et a pravis cogitationibus mundemur in mente.
O God, who seest how destitute we are of all strength, preserve us both within and without, that our bodies may be free from all adversity, and our souls purified from all evil thoughts.
(Collect)


Sequel of the Holy Gospel according to Matthew.
At that time: Jesus taketh unto him Peter and James, and John his brother, and bringeth them up into a high mountain apart: and he was transfigured before them. And his face did shine as the sun and his garments became white as snow. And behold there appeared to them Moses and Elias talking with him. Then Peter answering, said to Jesus: Lord, it is good for us to be here: if thou wilt, let us make here three tabernacles, one for thee, and one for Moses, and one for Elias. And as he was yet speaking, behold a bright cloud overshadowed them. And lo, a voice out of the cloud, saying: This is my beloved Son, in whom I am well pleased: hear ye him. And the disciples hearing, fell upon their face, and were very much afraid. And Jesus came and touched them, and said to them: Arise and be not afraid. And when they lifted up their eyes, they saw no one, but only Jesus. And as they came down from the mountain, Jesus charged them, saying: Tell the vision to no man, till the Son of Man shall be risen from the dead.
(St Matthew 17)

Visionem quam vidistis, * nemini dixeritis donec a mortuis resurgat Fílius hominis.
Tell the vision * which ye have seen to no man until the Son of Man be risen again from the dead.
(Magnificat Antiphon at Vespers)
Posted by davidforster at 00:30