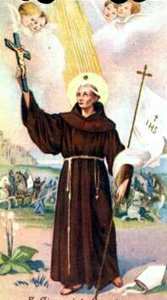 St John, born at Capistrano in the Abruzzi on June 24th, 1385, entered the order of St. Francis at the age of 39. He was chosen by God to deliver Europe from Islam, which threatened to invade it in the fifteenth century. Mohammed II had taken Constantinople, capital of the Eastern Empire, and was marching on Belgrade. Pope Callistus III decreed a crusade. St. John preached it (Gospel) in Pannonia and other provinces. Supported by the noble Hungarian, John Hunyady, he enrolled 70,000 Christians. These improvised warriors had not other arms but forks and flails. John, whose "strength was the Lord" (Introit), "obtained by their bravery the victory after severe fighting" and thus assured the triumph of the Cross over the Crescent (Collect). That very evening 120,000 Turks lay dead or had fled and Mohammed, wounded, renounced his projects against Christian Europe. St. John died in 1456.

Let us have recourse to the protection of St. John and do penance in order to repel the attacks of the evil spirit (Postcommunion).

Ego autem in Domino gaudebo et exsultabo in Deo Jesu meo: Deus Dominus fortitudo mea. * Exsultate Deo adjutori nostro, jubilate Deo Jacob.
I will rejoice in the Lord; and I will joy in God my Jesus: the Lord God is my strength. * Rejoice to God our helper: sing aloud to the God of Jacob.
(Hab. 3:18-19 and Psalm 80:2 from the Introit of Mass)

Deus, qui per beatum Joannem fideles tuos in virtute sanctissimi nominis Jesu de crucis inimicis triumphare fecisti: praesta, quaesumus; ut, spiritualium hostium, ejus intercessione, superatis insidiis, coronam justitiae a te accipere mereamur.
O God, who through blessed John didst cause Thy faithful to triumph over the enemies of the cross in the power of the most holy name of Jesus: grant, we beseech Thee, that by his intercession we may overcome the snares of our spiritual enemies, and deserve to receive from Thee the crown of righteousness.
(Collect)