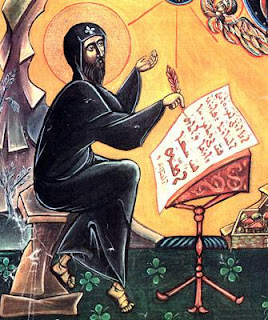 St. Ephrem was born at Nisibis in Mesopotamia and was one of the lights of the Church (Gospel). His father, a pagan priest, cast him out of his home. He then went as a hermit in the desert and was ordained deacon of Edessa (Communion). Led by the Holy Ghost to Caesarea in Cappadocia, he there met St. Basil. In order to refute the numerous errors which were being spread by the prayers and canticles of the heretics, he wrote poems and Christian hymns, celebrating the mysteries of the lives of Christ, the Blessed Virgin and the saints. That is why he is called "the harp of the holy Ghost". He always had a great devotion to our Lady. He died at Edessa in 375 under the Emperor Valens. Benedict XV proclaimed him a Doctor of the universal Church (Collect).

Let us ask God, through the intercession of St. Ephrem, to defend His Church against the snares of error and wickedness (Collect).