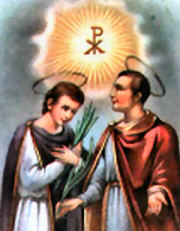 The two brothers John and Paul were Romans and in the service of Constantia, daughter of Constantine. Julian the Apostate, having invited them to be among his familiar friends, they refused, so as to remain faithful to Jesus.

Ten days were allowed them to deliberate, and they used them in distributing all they possessed to the poor. They were then arrested and "without fearing those who can only kill the body and beyond that can do nothing more" (Gospel), they became in 362, brothers more than ever, by the same faith and the same martyrdom (Collect, Gradual, Alleluia). The Church compares them "to the two olive-trees and to the two candlesticks, mentioned in the Apocalypse, which shine before the Lord." "These just men," she adds "have stood before the Lord and have not been separated from one another." Wherefore both their names, mentioned in the Canon of the Mass (first list) pass on from generation to generation, while their bodies rest in peace (Epistle) in the ancient church erected in their honour on Mount Coelius at Rome. It is there that the Station is held on the Friday after Ash Wednesday.

Let us enjoy to-day with the Church, the double triumph of SS. John and Paul (Collect) and let us, like them, courageously confess Jesus before men so that He may recognize us for His own before His angels (Gospel).

Multae tribulationes justorum, et de his omnibus liberavit eos Dominus: Dominus custodit omnia ossa eorum: unum ex his non conteretur. * Benedicam Dominum in omni tempore: semper laus ejus in ore meo.
Many were the afflictions of the just, and out of all these the Lord hath delivered them: the Lord keepeth all their bones; not one of them shall be broken. * I will bless the Lord at all times: His praise shall be always in my mouth.
(Psalm 33:20-21,2 from the Introit of Mass)

In the Divine Office, there are proper antiphons for the psalms at Lauds and Vespers:

Joannes et Paulus, agnoscentes tyrannidem Juliani, facultates suas pauperibus erogare coeperunt.
John and Paul, when they had heard the tyrannous command of Julian, began to disperse abroad their goods among the poor.

Joannes et Paulus dixerunt ad Gallicanum: Fac votum Deo coeli, et eris victor melius quam fuísti.
John and Paul said unto Gallican, Make thy vow unto the God of heaven, and thou shalt be yet a greater conqueror than ever thou hast been heretofore.