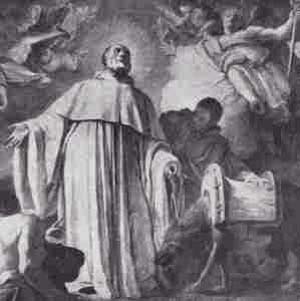 William was born of noble parents at Vercelli, in Piedmont. Having left his family and renounced his riches (Gospel), he built a monastery on Monte Vergine. Like Moses, to whom God gave His law on the mountain (Epistle), under the guidance of heaven he gave to the congregation of hermits, whose father he became (Communion), a rule, inspired, in a great measure, by that of St. Benedict. His holy life was entirely spent in the meditation of divine things (Introit), and became renowned by his numerous miracles.

After having foretold the moment of his death, he fell asleep in the Lord in 1142, and in heaven his brow was encircled with "the crown of precious stones" (Gradual, Offertory), the symbol of his virtues.

Let us walk in the footsteps of St. William, with the help of his prayers (Collect).


Deus, qui infirmitati nostrae, ad terendam salutis viam in Sanctis tuis exemplum et praesidium collocasti: da nobis, ita beati Gulielmi Abbatis merita venerari: ut ejusdem excipiamus suffragia, et vestigia prosequamur.
O God, who, to help our weakness, hast given us Thy saints to be our example and protection in the way of salvation; grant that we may so venerate the merits of the blessed abbot, William, that we may both gain his prayers and follow in his footsteps.
(Collect)