The Holy Apostles Peter and Paul 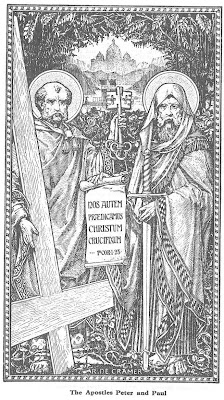 To-day the whole Church rejoices, for "God has consecrated this day by the martyrdom of the apostles Peter and Paul" (Collect). In both the grand basilicas erected at Rome over the tombs "of these two princes who by the cross and the sword have obtained their seat in the eternal senate," this double martyrdom was celebrated. Later, on account of the distance which separates the two churches the festival was divided, St. Peter being more specially honoured on June 29th and St. Paul on June 30th.

St. Peter, bishop of Rome, is the vicar, that is to say the visible representative of Christ. As is shown in the Preface, Alleluia, Gospel, Offertory and Communion, the Jews had rejected Jesus. They also rejected His successor (Epistle). Displacing the religious centre of the world, St. Peter then left Jerusalem for Rome which became the eternal city and the seat of the Popes.

St. Peter, the first pope, speaks in the name of Christ who has communicated to him His doctrine of infallibility. He is not guided by flesh and blood, but by the heavenly Father who does not permit the gates of hell to prevail against the Church of which he is the foundation (Gospel).

St. Peter on receiving the keys is placed at the head of the "kingdom of heaven" upon earth, that is to say the Church, and he reigns in the name of Christ who has invested him with His power and supreme authority (Gospel).

The names of St. Peter and St. Paul head the names of the apostles in the Canon of the Mass (first list).

With "the Church which did not cease praying to God for St. Peter" (Epistle), let us pray for his successor "the servant of God, our Holy Father the Pope" (Canon of the Mass).

Nunc scio vere, quia misit Dominus Angelum suum: et eripuit me de manu Herodis, et de omni exspectatione plebis Judaeorum. * Domine, probasti me, et cognovisti me : tu cognovisti sessionem meam, et resurrectionem meam.
Now I know in very deed, that the Lord hath sent His angel, and hath delivered me out of the hand of Herod, and from all the expectation of the people of the Jews. * Lord, Thou hast proved me, and known me: Thou hast known my sitting down, and my rising up.
(Acts 12:9 and Psalm 138:1-2 from the introit of Mass)

Deus, qui hodiernam diem Apostolorum tuorum Petri et Pauli martyrio consecrasti: da Ecclesiae tuae, eorum in omnibus sequi praeceptum, per quos religionis sumpsit exordium.
O God, who hast made holy this day with the martyrdom of Thine apostles Peter and Paul; grant that Thy Church may in all things follow the precepts of those from whom it first received the faith.

Continuation of the holy Gospel according to St. Matthew.
At that time, Jesus came into the quarters of Caesarea Philippi, and He asked His disciples, saying: Whom do men say that the Son of man is ? But they said: Some, John the Baptist, and other some Elias, and others Jeremias, or one of the prophets. Jesus saith to them: But whom do you say that I am? Simon Peter answered, and said: Thou art Christ, the Son of the living God. And Jesus answering, said to him: Blessed art Thou, Simon Bar-Jona, because flesh and blood hath not revealed it to thee, but My Father who is in heaven: and I say to thee, that thou art Peter, and upon this rock I will build My church, and the gates of hell shall not prevail against it; and I will give to thee the keys of the kingdom of heaven; and whatsoever thou shalt bind upon earth, it shall be bound also in heaven; and whatsoever thou shalt loose on earth, it shall be loosed also in heaven.
(St Matthew 16:13-19)