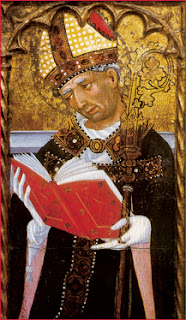 Paulinus, born in 353 of a very distinguished Roman family at Bordeaux, in Aquitaine, distinguished himself in his studies and became senator at the age of twenty-five. Elected consul, he established his residence at Nola, in Campania, near the tomb of St. Felix, the martyred priest whose feast the Church celebrates on January 14th1, where he was suddenly touched by grace and soon after baptized. Following the example of Christ, "who, being rich, made Himself poor" (Epistle), and who counselled the practice of the virtue of poverty (Gospel), he abandoned his great riches and at this price bought the kingdom of heaven. Having separated from his wife, who also gave herself to God, he became a priest. Later he was bishop of Nola (Introit, Gradual, Alleluia, Offertory, Communion).

His former friends blamed him. He "is content with the approval of Jesus." Soon afterwards the Goths ravaged Campania and utterly despoiled the rich of Rome, who gained no merit thereby, whereas St. Paulinus, who had abandoned his riches voluntarily for Christ's sake, is rewarded a hundredfold hereafter in eternal life. He died in 431 at the age of seventy-eight, and was buried near St. Felix at Nola.

Deus, qui omnia pro te in hoc saeculo relinquentibus, centuplum in futuro et vitam aeternam promisisti: concede propitius; ut sancti Pontificis Paulini vestigiis inhaerentes, valeamus terrena despicere, et sola caelestia desiderare.
O God, who hast promised a hundredfold hereafter and life everlasting to those who leave all things in this world for Thy sake; grant in Thy mercy that following in the footsteps of the holy bishop Paulinus, we may despise the things of this world and desire only those of heaven.
(Collect)