24th June, The Nativity of St. John the Baptist

The Nativity of St. John the Baptist 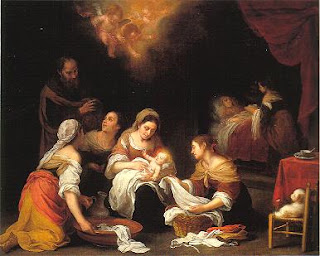 "A prophet of the most High" (Alleluia), St. John is pre-figured by Isaias and Jeremias (Introit, Epistle, Gradual); moreover, he was consecrated before birth to announce Jesus (Secret) and to prepare souls for His coming.

The Gospel narrates the prodigies which accompanied his birth. Zachary gives his child the name which St. Gabriel has brought him from heaven, which signifies: The Lord has pardoned. He immediately recovers his speech and, filled with the Holy Ghost, he foretells the greatness of his son: "He shall walk before the face of the Lord to give unto the people the knowledge of salvation."

The angel Gabriel had announced to Zachary that "many would rejoice in the birth of St. John the Baptist". Indeed not only "the neighbours and relations of Elizabeth" solemnized the event, but every year, on its anniversary, the whole Church invites her children to share in this holy joy. She knows that the nativity "of this prophet of the most High" at this "Summer Christmas" is intimately connected with the Advent of the Messias.

After the feast of the Nativity of St. John, the days become shorter, while, on the contrary, after the nativity of the Saviour, of which this feast is the prelude, the days become longer. The Precursor must efface himself before Jesus who is the true light of faith. "He must increase," says St. John, ''and I must decrease."

The solstices were the occasion of pagan feasts when fires were lighted to honour the orb which gives us light. The Church christianized the rites seeing in them a symbol of St. John who was "a burning and brilliant lamp". Indeed "she encouraged this kind of manifestation which corresponds so well with the character of the feast. The St. John bonfires happily completed the liturgical solemnity; they showed the Church and the earthly city united in one thought." The name of the Precursor is inscribed in the Canon of the Mass at the head of the second list.

Formerly, on his feast-day three masses were celebrated in his honour, and numerous churches were dedicated to him. Parents loved to give his name to their children.

Paul the Deacon, a monk of Monte Cassino and a friend of Charlemagne, had composed, in honour of St. John the Baptist, the hymn: "Ut queant laxis." In the thirteenth century the Benedictine monk Guy of Arezzo noticed that the notes sung on the first syllabes formed the sequence of the first six degrees of the scale. He named each degree by the corresponding syllable: "Ut, re, mi, fa, sol, la, si" and thereby greatly facilitated the study of musical intervals. 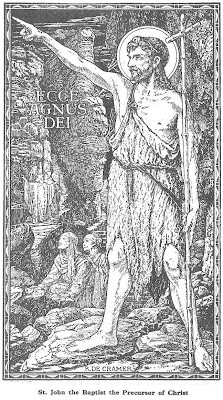 De ventre matris meae vocavit me Dominus nomine meo: et posuit os meum ut gladium acutum: sub tegumento manus suae protexit me, et posuit me quasi sagittam electam. * Bonum est confiteri Domino: et psallere nomini tuo, Altissime.
The Lord hath called me by my name from the womb of my mother, and He hath made my mouth like a sharp sword; in the shadow of His hand He hath protected me, and hath made me as a chosen arrow. * It is good to give praise to the Lord, and to sing to Thy name, O most High.
(Isaias 49:1-2 and Psalm 91:2 from the Introit of Mass)

Deus, qui praesentem diem honorabilem nobis in beati Joannis nativitate fecisti: da populis tuis spiritualium gratiam gaudiorum; et omnium fidelium mentes dirige in viam salutis aeternae.
O God, who hast made this day honourable to us by the birth of blessed John; pour forth upon Thy people the grace of spiritual joys, and direct the souls of all Thy faithful into the way of eternal salvation.
(Collect)