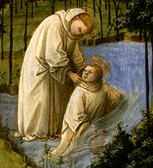 Haying been committed in his earliest childhood by the Senator Eutychius, his father, to the care of St. Benedict, the great Patriarch of the monks of the West, St. Maurus faithfully reproduced all the virtues of his Master. The latter having commanded him to save young Placid who was drowning, he walked with simple confidence on the waters of a torrent and brought him back safe and sound. Haying been sent to Gaul according to a tradition, he promulgated "the Holy Rule of St. Benedict", founded the monastry at Glanfeuil and wrought many miracles.

By his doctrine, permeated by evangelical perfection, and by his works, that is to say by thousands of abbeys which during twelve centuries covered France, and which all sprang from the one he had founded, he bore striking testimony to the divinity of Jesus. He died in 584.

Os justi meditabitur sapientiam, et lingua ejus loquetur judicium: lex Dei ejus in corde ipsius. * Noli aemulari in malignantibus: neque zelaveris facientes iniquitatem.
The mouth of the just shall meditate wisdom, and his tongue shall speak judgement: the law of his God is in his heart. * Be not emulous of evildoers: nor envy them that work iniquity.
(Psalm 36:30-31 and 1 from the Introit of Mass)

Intercéssio nos, quaesumus, Dómine, beáti Mauri Abbátís comméndet: ut, quod nostris méritis non valémus, ejus patrocínio assequámur.
May the intercession of the blessed Abbot Maurus, we beseech Thee, O Lord, commend us unto Thee, that what we cannot have through our own merits, we may obtain through his patronage.
(Collect)