8th January, 3rd Day of the Octave of the Epiphany

3rd Day of the Octave of the Epiphany 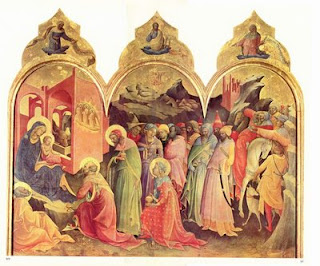 Office Hymn  for the Epiphany, as used at Matins and Vespers. The original was written by Sedulius.

Cruel tyrant Herod! why tremblest thou at the coming of the King our God? He that gives men a heavenly kingdom, takes not from kings their earthly ones.

On went the Magi, following the Star that went before them, and which they had seen in the East. They seek by this light Him that is the Light, and, by their gifts, acknowledge him to be God.

The heavenly Lamb touched the pure stream, wherein he deigned to be baptised: it is we whom he hereby washes from our sins, for he could have none to be cleansed.

At Cana, he showed a new sort of power: the water in the vases at the feast turns red; and, when ordered to be poured out, lo! it had changed its nature, and was wine.


Glory be to thee, O Jesus, that manifestest thyself to the Gentiles: and to the Father, and to the Spirit of love, for everlasting ages. Amen.
Posted by davidforster at 00:30