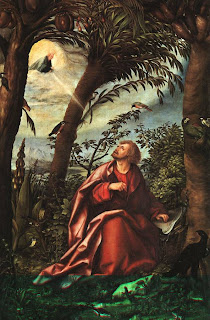 In medio Ecclesiae aperuit os ejus; et implevit eum Dominus Spiritu sapientiae et intellectus; stolam gloriae induit eum. * Bonum est confiteri Domino, et psallere nomini tuo, Altissime.
He opened his mouth in the midst of the Church, and the Lord filled him with the spirit of wisdom: he clad him with a robe of glory. * It is good to give praise to the Lord, and to sing to thy name, O Most High.
(Ecclus. 15:5 and Psalm 91:2 from the Introit of Mass)

From the Treatise on St. John by the Bishop St. Augustine.
Of the four Gospels (or rather of the four books of the one Gospel) that of the Apostle Saint John is not unfitly compared, in point of spiritual discernment, to an eagle.  For in his preaching he hath taken a higher flight than the other three, and hath soared aloft much more sublimely.  Now in this sublime uplifting he must needs lift up our hearts likewise.  The other three Evangelists did walk with the Lord like as man might walk, as it were on earth, for of the Godhead they told but little.  Whereas the Evangelist John doth seem as if he scorned to tread the earth.  Even in the very opening words of his discourse doth he thunder upon us, and soareth not  only above earth and air and sky, but above the hosts of the Angels also, and all the array of the invisible Powers.  Yea, through them he doth pass to the very Maker of them all, saying  : In the beginning was the Word, and the Word was with God, and the Word was God.
(Tract 36)

Reference for the translation of St Augustine: http://www.breviary.net/propseason/christmas/propseasonchri0103.htm
Posted by davidforster at 00:30