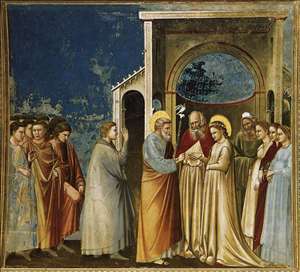 The first definite knowledge of a feast in honour of the espousals of Mary dates from 1517, when  it was granted by Leo X to the Nuns of the Annunciation, founded by Sainte Jeanne de Valois. This feast was celebrated on 22 October. Its Mass honoured the Blessed Virgin exclusively; it hardly mentioned St. Joseph.

The first proper Office was composed by Pierre Doré, O.P. (died 1569), confessor of Duke Claude of Lorraine. This Office commemorated both Joseph and Mary. Pierre Doré in 1546 unsuccessfully petitioned Paul III to extend the feast of the Desponsatio B.M.V. to the Universal Church. But even without the recommendation of the Apostolic See, the feast was adopted by many Churches.

In our days it is kept in nearly the entire Latin Church on 23 January, in the Spanish-speaking countries on 26 Nov, but it has never been extended to the Universal Church. Since St. Pius V abolished the Office of Pierre Doré and introduced the modern Office, it is again a feast of Mary. The commemoration of St. Joseph in Mass, Vespers, and Lauds  can only be made by a special privilege.

Salve, sancta Parens, eníxa puérpera Regem: qui coelum terrámque regit in saecula saeculórum. * Eructávit cor meum verbum bonum: dico ego ópera mea Regi.
Hail, holy Mother, thou who didst bring forth the King Who rules Heaven and earth for ever and ever. * My heart hath uttered a good word: I speak my works to the King.
(Psalm 44:2, from the Introit of Mass)

Sanctíssimae Genetrícis tuae Sponsi, quaesumus, Dómine, méritis adjuvémur: ut, quod possibílitas nostra non óbtinet, ejus nobis intercessióne donétur.
We beseech Thee, O Lord, that we may be helped by the merits of the Spouse of Thy most holy Mother, so that we cannot obtain of ourselves, may be given to us through his intercession.
(Commemoration of St. Joseph)